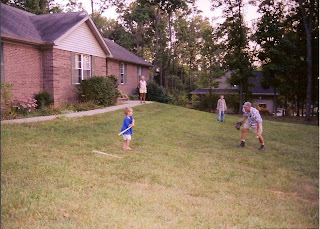 Here are some pictures of "PE" with Memere and Pepere. When they were here the first week of September, we went to the Louisville Slugger Museum and factory. That was a really cool tour. I 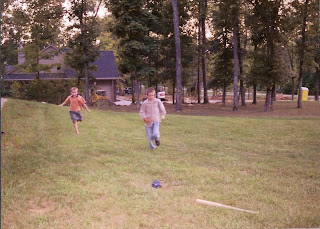 recommend it if you come to Louisville. Also, they give free admission to active duty military and their dependents! Yay!
Memere and Pepere (Gary's mom & dad) bought Gabriel a personalized wooden bat for his birthday. I think it was his favorite gift. We've played baseball in the front yard several times since then. It's been so much fun! The little bat Dominic is using is a miniature bat that they give away at the end of the tour. We now have 5 of them. I had to mark them all with their initials because the "not mine" ghost had come into our house. As in, that's not mine, mine's in my room, downstairs, etc. 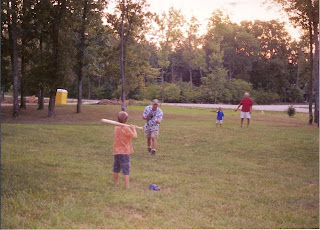 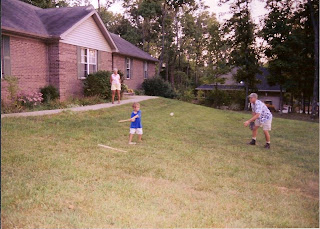 Two words that instill both loathing and joy in a mother's heart.
Whenever one of my children say they've been playing with the Legos or Playdoh, or that they want to, I loath the end results. The cleanup can be a pain. Fortunately for me, my children are pretty good about putting their toys away when asked to.
Joy is another reaction, because I know that they will be occupied for a long time, mostly quietly.
And, as I heard somewhere-- Silence is golden, duct tape is silver. (I don't know who said this, so I'm sorry--can't credit you!)
Posted by Kristina at 8:08 PM No comments:

So, my children started rehab 4 days ago. All 3 of them, ages 10, 6, and 4. The detoxing process is the worst part. They scream, throw fits, lose sleep, and generally are in bad moods. Then, they start relearning how to play. They start sleeping better and longer. Slowly, their attitudes improve.
What are they detoxing from? Video mediums. They are officially unplugged for at least a month. I will drag it out as long as possible.
While they have access to video games, TV, etc, they are little monsters. All they can think of to do is play a video game. When I tell them no, they throw fits. So, we are detoxing. The results are evident almost immediately. Bear, 4, goes to bed at night easier. Yesterday and today, he spent hours playing with his toys. Toys that just Monday, I threatened to get rid of because they were never played with. Tiger, 6, goes to sleep faster because he spends his days running and playing instead of sitting gaming. Monkey, 10, doesn't snap at people near as often.
Monkey's detox is harder, because he will just replace the games and TV with books. Now, I know what you're thinking, Why don't you want him reading? The answer is this. When he reads for long, uninterrupted time spans, he is a bear. He loves to read and will do so for 4 hours straight, longer if you let him forget to eat. But, then, he is in a horrible mood. So, we have to force him to do other things. The hard part of that is that I love to read, too. So, I am having to force him to give up something that I love. It's harder than telling them they can't play video games when video games make me sick (motion sickness--isn't that funny?).
So, today was really good. For 2 days, Monkey has been a worker bee knocking out his schoolwork by 1:30, which is amazing because he puts out a ton of work! Tiger has played outside almost non-stop when he wasn't do schoolwork (again, without much complaining). Bear, as I said before, is playing with his toys like a mad man.
We're one happy family-until one of them starts begging to use the video games. Maybe I should sue Nintendo for marketing this addictive toy to my children and John for giving it to them. The only problem with that is that I take total responsibility for letting them play it!
Posted by Kristina at 8:06 PM No comments:

Why am I blogging and who I am

My name is Kristina. I am the stay-at-home, homeschooling mom of 3 boys. My sons are ages 14, 11, and 8. They are wonderful--if I do say so myself. I am the lucky wife to one wonderful soldier.

A lot has changed about me since I started this blog. This post was updated May 18th, 2012.

About me:
I am a feminist, but perhaps not in the way post people think of the word. I believe that everyone has a special place in this world. They just have to find their place. They should not allow their race, gender, or anything else get in their way. I know my place in this world. I love my place. My place is fulfilling and special. If it ever stops being fulfilling and special, I will change my place in the world. I love being a stay-at-home mom. At some point, I'd like to go back to school. In the meantime, I'm enjoying learning with my children.

I am a conservative all people are created equal and deserving of the same rights. I am a mom who wants the best for her children, and will fight for whatever that is. I homeschool my children because that is what is best for them at this time. I trust my instincts. They've rarely led me astray.

The reason I homeschool is this: it is the best form of education for my children at this time.
Posted by Kristina at 6:08 PM 1 comment: