Learning to Sew for Halloween

I am, as usual, furiously trying to finish making the boys' Halloween costumes before Halloween. Why am I sewing so furiously 2 weeks before Halloween? Because Gabriel and Xavier are leaving Tuesday to visit Memere and Pepere in Maine. I need them here for fittings, but they won't be back until the 30th. So...
The boys, after much discussion, decided to be super villains for Halloween. To give you a proper understanding of how much discussion this took, I'll tell you this. The boys start discussing what they are going to be for Halloween as soon as they decide what they want to be this year. It usually takes them all year to decide. For example, this years costume "theme" started being discussed in September of 2006. It was finally confirmed in September of 2007. I have been searching for patterns ever since. I tried to get them to let me buy them, but they didn't like the costumes we could find, and we couldn't even find all three that they wanted.

The only problem? I couldn't find a pattern for the Joker, the Riddler, or Two-Face. So, I thought, well, really, they just wear suits, right? Nope, couldn't find patterns for those, either. 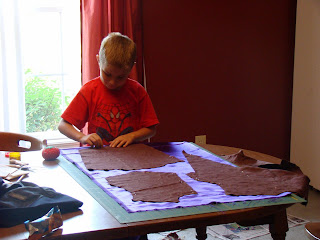 So, I've been working on making my own patterns. Xavier he 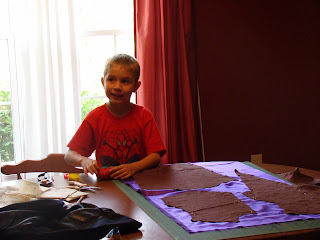 lped a lot on his costume. He sat and helped me draw, cut, pin, fit, etc. I'm almost done with his. All I have left is his bow tie. He's going to be the Joker. Did you know that the Joker has tails? 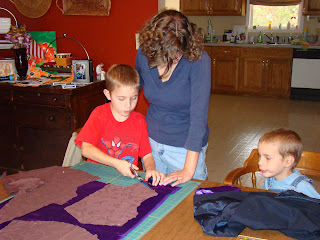 Gabriel is going to be the Riddler, and all we have left for that is to find him a bowler hat. I lucked out on that costume. We found a picture of the Riddler wearing grey pants, black shirt, green jacket and tie. Gabriel already has grey pants and black shirt, so I only had to make the jacket and tie. Now, however, he informs me that he needs a mask, too. That should be relatively simple. Was he willing to help me? Not this chauvinist. He informed me that a man has to "throw away his dignity" to sew. He has always been a chauvinist and I suspect he always will be.

Dominic is going to be Two-Face. Again, I got lucky for his costume. He has just about outgrown a suit. Since I don't have any kids coming up behind him, I have no problem cutting up the suit to use as both a pattern and half the costume. I haven't started on his yet. But, I will do so.
Once I have them all done, I'll take pictures of all of them. Oh, and they want me to be Batwoman so that I can chase them down the street. How appropriate.
Posted by Kristina at 5:40 PM