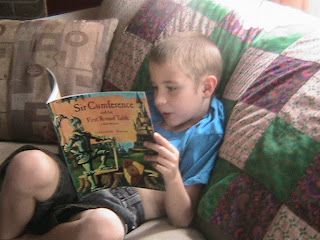 Yay! This is, in my mind, a major leap for beginning readers.

For the last year, Xavier has been a reluctant reader because he would much prefer to do math. This has been a dilemma for me. Gabriel was the opposite. I started teaching Xavier intensive phonics in January. He has been very reluctant to sit down and read, preferring to run around or just look at pictures. Our phonics program has NO pictures, so he couldn't guess at what the words say.

Today, I caught him reading aloud to Dominic. This is the first time he has picked up a book on his own and read it (versus looking at the pictures). Fifteen minutes later, I walked into the living room to find him on the couch reading to himself "silently". I put silently in quotes because he was obviously sounding out words in his head since he was moving his mouth as he read. I'm so excited. 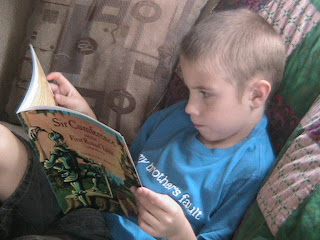 Congratulations on becoming a reader, Xavier!
Posted by Kristina at 1:24 PM