We're back from the land of slow internet! Yay!
We had an absolute blast over Christmas. Thanks Mommy for letting everyone, minus Gary, "veg" at your house over Christmas. We had lots of fun playing Taboo, Apples to Apples, Blurt and eating lots and lots of dessert. 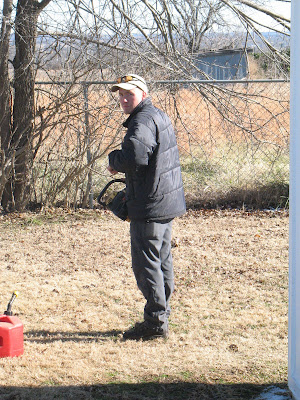 I say "minus Gary" because this is what Gary did while the rest of us (meaning the boys, Mom and I) hung out. That's a chainsaw in my wonderful hubby's hands! He was busily cutting down and dragging these to the "burn" pile for 4 days! 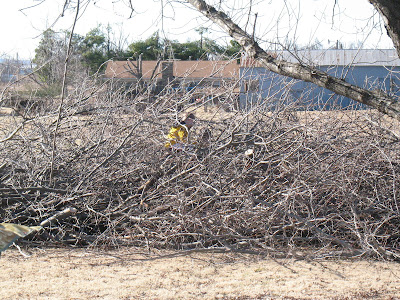 You'll notice the kid in the burn pile. No, we weren't burning them at the stake. They were using it as a fort. They had a blast in there and only got stuck a few times.
I've got more pictures, but I left them in Oklahoma. So, when my mom gets around to finding someone with high speed internet to send them to me, I'll post them.
The Cunanans (family friends) brought over their Wii and we borrowed Uncle Phillip's projector. Oh, my gosh! That was SO MUCH FUN! We decided that we would combine the boys' Christmas money from various places and get a Wii. So, now we just have to wait for the stores to get them back in stock.
We're NOT in a rush because we need to get some school work done. It would be really hard for the boys to focus with something that tempting sitting in the basement. This will just make it easier.
We're trying to get as much of our year's work done before April as possible. Gary has a school to go to in Ft Walton Beach, FL and we're going with him for a month and a half! We're very excited. We've rented a condo on the beach. My school plan is to have a reduced schedule. We're going to have just the basics (math and grammar), plus history and science on a lengthened schedule. That way, we'll be able to play more. So, in the meantime, we're stepping up our school schedule to be able to slow down when we get to FL.
On to New Year's Eve. We spent the evening playing games. We played Apples to Apples and Cadoo, both of which we got for Christmas. I recommend both. Our children had no problem staying up til midnight. After all, we had just returned from the central time zone where we had been staying up later than usual, anyway. (Now, we're actually having trouble readjusting back to our normal schedule.) However, toward the end of the evening, Dominic thought he needed to build Legos. To see how much effort goes into that, take a look at this post. But, for a funny discussion between Dominic and I, take a look at this video. When I told him we were going to toast the New Year, he got all excited and said, "and then we're gonna build." Apparently his New Year's Resolution is to stay up all night and drive his parents crazy!

Isn't that boy just too cute!