During the summer, or maybe toward the end of the last school year, I decided that our school room was way too small. It was certainly better than nothing, but the room is only 7x8, and between the desk, the shelves, and the beanbag chairs, there wasn't anymore floor space. So, I decided that we could sacrifice our guest bedroom/sewing room for a school room. We only get overnight guests on an average of once a year, so I see no point in maintaining an entirely seperate room for them. Sorry, guys.

Anyway, after the septic backed up into our basement, we had to pile stuff on the bed (and move the bed) so the guys could rip out the contaminated carpet. (Just think about what that carpet was contaminated with. That'll make your day and help you digest your next meal.)

Here is a before picture. 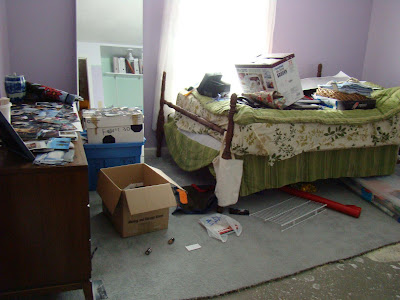 And, here are the after pictures!

The first thing we did was pull up the carpet. 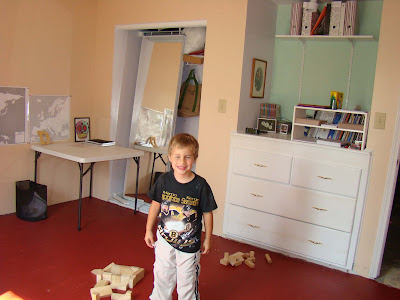 The second thing we did was paint the walls. I don't know if the boys would have been able to work in a purple room. It probably would have been an affront to their senses. Then, we painted the floors. We're going to put hard wood in the basement when we put hardwood upstairs. That, however will not happen until after Gary gets back from his deployment. So, we decided to paint the schoolroom floor until then. I think it will work out well. Dominic is able to play with blocks and puzzles without them getting all messed up because of carpet. 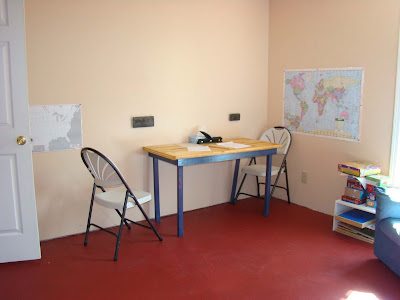 My plan is to paint that wall behind the desk with chalkboard paint. We'll then move the desk to the middle of the room. In the meantime, it'll stay there. You can't see the signs on the walls well, but they are Gabriel's and Xavier's names in metal. They're cool, but I've never found a use for them before. (We've had them for 6 years!) 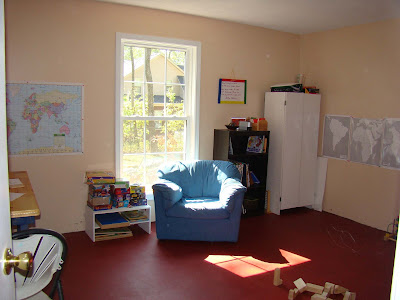 This is my comfy chair. I decided there was no reason for me to sit in an office chair. This way, we can cuddle up on the chair and read together. The wall to the right of the white cabinet is shared with the playroom. We plan to open this up and put in glass doors at the same time we put in wood floors. We have a really nice, big, finished basement, but it was horribly designed. We've been trying to figure out better configurations. This is one of the things we plan to do to help out. 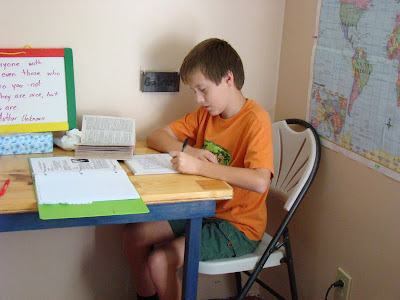 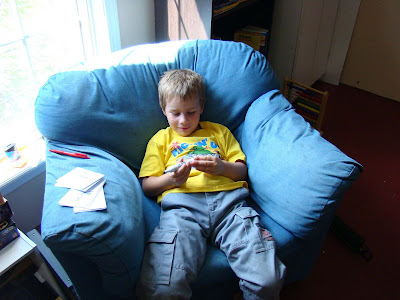 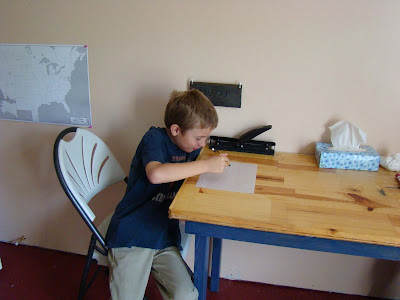 We are really enjoying our new schoolroom. There is enough space for everyone to move around in, yet we're still all together and focused on what we're doing.
Posted by Kristina at 2:09 PM 1 comment:

I haven't posted in forever, so I've got a lot of catching up to do. As a result, I'm posting a few pictures from a month ago. 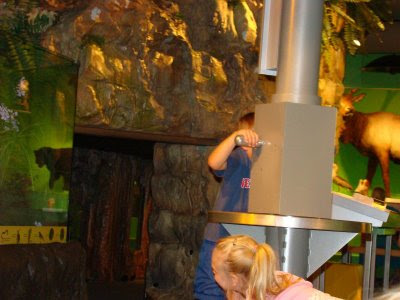 We went to visit the science museum with our homeschool group. The boys had a blast, and we plan to return this week. 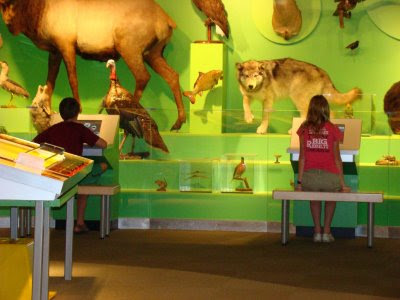 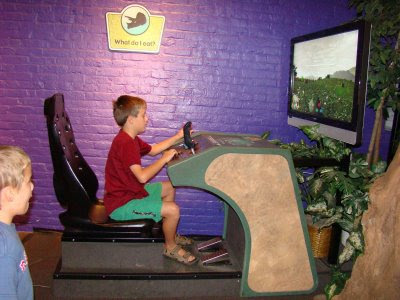 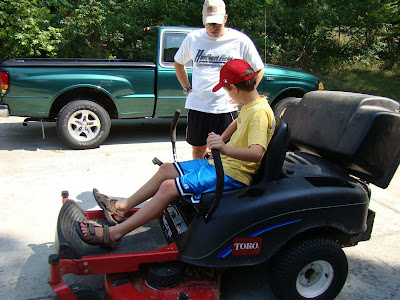 Gabriel has been wanting to learn how to mow. Gary and I are fine with this! Unfortunately, I just don't think Gabriel's quite strong enough to manage it easily. The good part is that he is willing to keep trying. He'll manage it eventually. 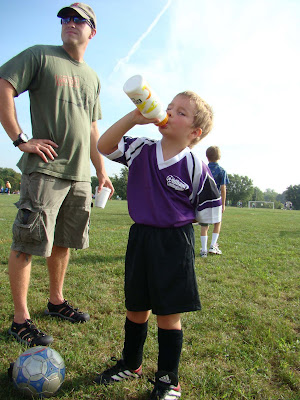 Dominic started soccer two weeks ago. He looks so cute in his uniform. He loves soccer. We love that he loves it. 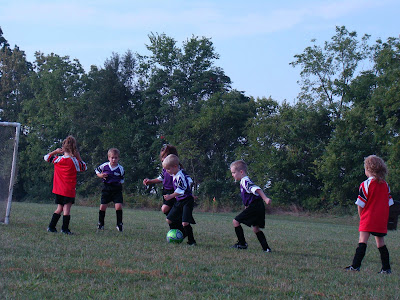 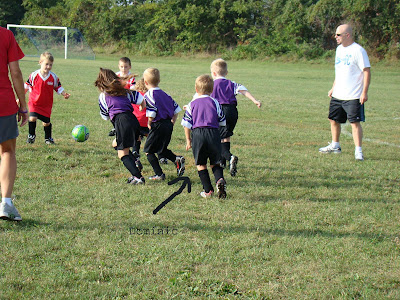 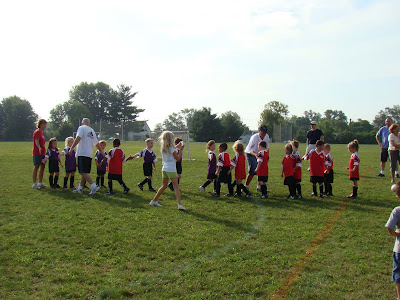 Now, a funny story about Xavier at Dominic's soccer game last Sunday. There is a playground at the soccer fields and Xavier and Gabriel were playing there. Toward the end of Dominic's game, Xavier came over, wearing only one shoe, hopping mad. I know, bad pun. He informed me that, "There's a girl over there being mean. She took my shoe off and I was chasing her around the playground. I was trying hard to control my anger and not let it all out at one time."

First, let me say that the fact that he was trying to control his anger is an enormous step forward. Now, back to the story. After Dominic finished his game, we joined Xavier and Gabriel at the playground. Low and behold, there was Xavier playing dolls with the same girl. Huh?!!! Apparently, they were flirting with each other. Ah, young love.

Now, we'll move on to pictures of our clean up efforts. We had a big wind storm, thanks to Ike. We lost power, and had two trees fall. Of course, Gary was in Texas. It really wasn't a big deal. I was able to buy enough ice to keep our food cold and we cooked on our grill and camp stove. We also heated water on our camp stove for dishes and bathing. But, by the time Gary got home on Tuesday (the power went out on Sunday), I was ready to have a shower. So, we went to his office and took showers twice that week. Ah, bliss! That Friday, Gary left again, but by then, the power had come back on, so I could take showers again. Truly, hot showers were what I missed the most. During the two and a half days Gary was home, he was able to cut down and cut up the two trees that fell. We also had a lot of hickory nuts fall. We've been collecting them. We're going to try eating them. Besides, they're not good for the mower, and I've twisted my knee stepping on them at least half a dozen times. Here are some pictures. 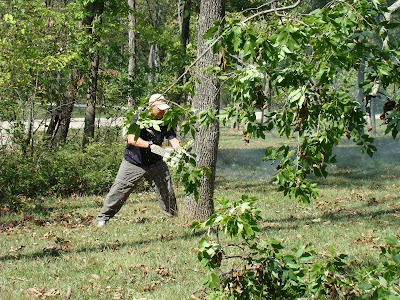 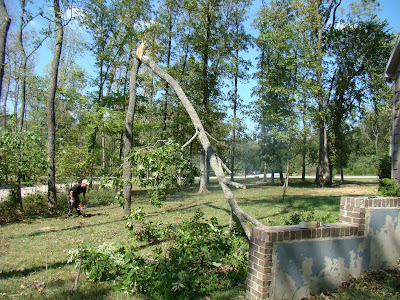 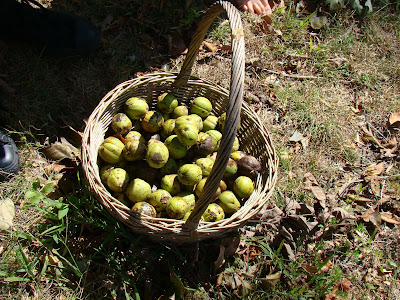 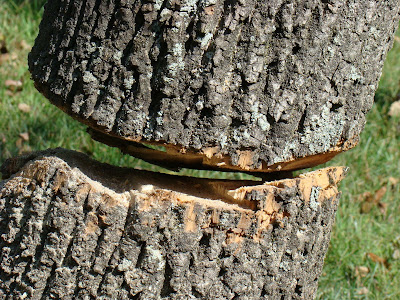 This picture was hilarious. Gary kept expecting the tree to fall, but I guess the way the tree was leaning on the part that had fallen, it was perfectly balanced! 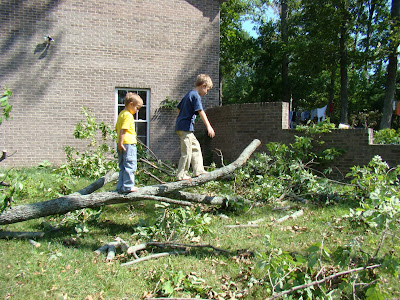 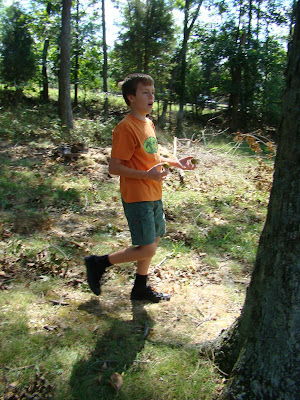 This week has been an amazingly busy week! Like I said, Gary left last Friday morning. Friday afternoon, the boys started swimming lessons at a new place. Dominic had soccer games Saturday and Sunday.
Monday, we went to drama club. We are so stoked about drama. The boys love acting and they had so much fun. On the way home from drama, I got a phone call from a lady organizing volunteers for making phone calls for the McCain Victory Office. The boys and I stopped for dinner and went back into town to work at the Victory Office. For those of you who don't know me, making phone calls is an amazingly difficult thing for me. For a while, making phone calls would actually make me throw up. Yes, it was bad! I'm getting better, but it is still not a comfortable thing. So, I'm considering this volunteer work as self therapy. The boys had a ball. Gabriel read Brisinger. Xavier watched T.V. and Dominic made a new friend and ran around wildly with his new best friend.
Tuesday, we stayed home and I made Only the Best Banana Bread Ever! Wow!!! This chick really needs to right a cook book. So far, we've tried her banana bread and chocolate chip cookies. Both have been amazing! The banana bread melts in your mouth. It is totally worth doing!
Wednesday, we went to park day. They spent the afternoon playing and I spent the afternoon chatting. It was wonderful.
Thursday, we stayed at home and worked.
Friday, it was back to the races. We went to swim lessons at 1, stayed for open gym (it's a gym and has a pool). We got home in time to have an hour between getting home and time to leave for soccer practice- just long enough to clean out the car and get Dominic into his shin guards and cleats. (Thanks Jen for having 3 boys who played soccer!) We got home in time for the kids to get into their pajamas before the babysitter got here. (Have I mentioned how much I love our babysitter? No? Well, I do. She's wonderful and we're very lucky to have her!) Then, I went out for a much needed night out. We started at Borders, where I let slip my disgust of: 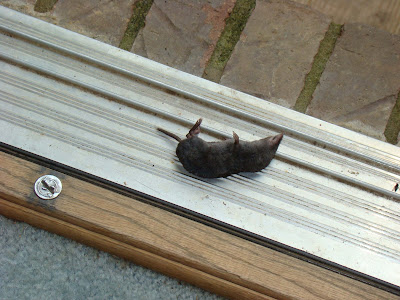 There was a mouse there! Now, I know you can't believe I took the above picture and shared it with you. But, seriously, there for a while, the cats were depositing dead mice outside all our doors several times a day. I'm glad that they've stopped that. Maybe they just killed all the mice. Or, maybe the mice grew up. These really seemed like babies. Anyway, there was a mouse at Borders. And, I, um, maybe let it be known that I don't like mice. One of the women was laughing at me. How rude! The fact of the matter is that if I was the same color as Tom's (of Tom and Jerry) owner, I could be mistaken for her when there is a mouse. So, I am actually thankful that the cats are so determined to search out and destroy all the mice within a 3 mile radius of our house. Back to our week.... 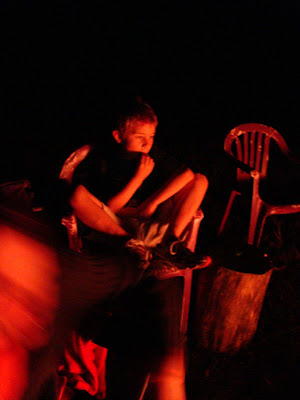 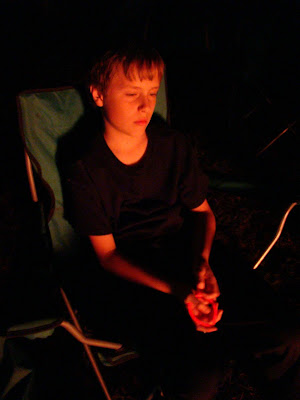 Posted by Kristina at 3:00 PM No comments:

Gabriel got lots of black clothes for his birthday. He was a wee bit disappointed at getting mostly clothes for his birthday. He was not disappointed about getting the clothes-just that that was all he got.:) He's not learned that lesson, yet. But, he has really enjoyed wearing them! He especially appreciates the fact the he is now able to wear all black. Thanks, Moms! 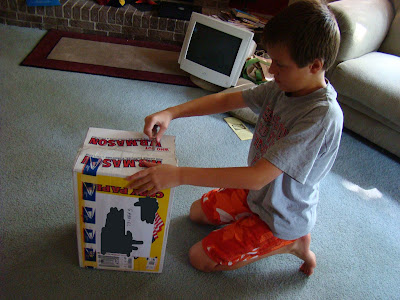 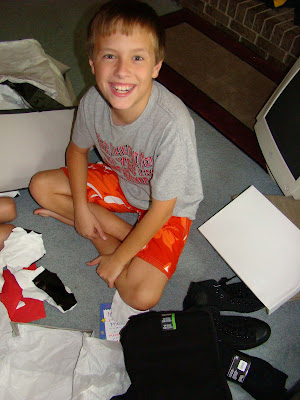 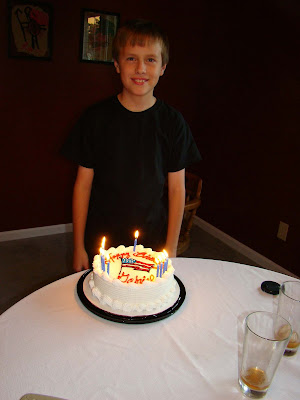 Email ThisBlogThis!Share to TwitterShare to FacebookShare to Pinterest
Labels: Gabriel

We Clean Up Nice

In early August, we went to an awards banquet. I thought I'd share the pictures our wonderful babysitter took afterwards. I am in love with this dress. Oh, and this man, too! 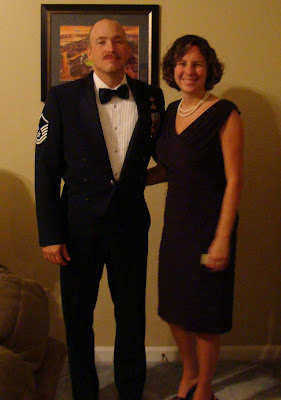 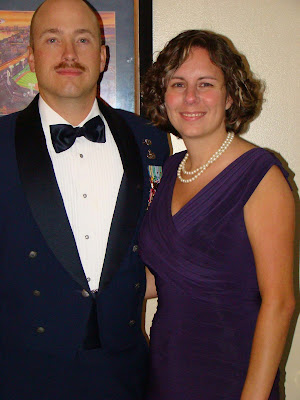 Email ThisBlogThis!Share to TwitterShare to FacebookShare to Pinterest
Labels: gary and I

"It is only when the people become ignorant and corrupt, when they degenerate into a populace, that they are incapable of exercising their sovereignty."
James Monroe
James Monroe was born April 28, 1758 in Westmoreland, Virginia. After being Secretary of State and Secretary of War under James Madison, he became president in 1817. His cabinet was John C. Calhoun as Secretary of war and John Quincy Adams as secretary of State. He also issued the Monroe Doctrine. The Monroe Doctrine was a document that said Europe couldn't colonize the Americas anymore. James Monroe was a Republican and an Episcopalian. He died July 4, 1831 in New York City, New York.
Posted by Gabriel at 8:17 PM No comments: