When we moved into our house, one of the things we had big plans for remodeling. Unfortunately, Gary has been gone a lot, and the only thing done, before now, was adding a small deck. With the advent of Tae Kwon Do in our lives, it became obvious that we would need some place to work out. Previously, we had a small area in the huge shop that we used to workout. However, it was not sufficient to do our forms or sparring. So, Gary and I decided that we could take the space that we had originally planned to make a 'man room' and transform it into a workout area. This particular project would be fairly inexpensive and easy to accomplish. We had to remove two doors and two walls, cut a new door through the laundry room into the shop, put a door in a new spot for the workout area, and add a wall between the shop and the workout area. Gary started working on it within a week of being home.

The area designated as our future workout area consisted of about half the shop, part of the basement hallway, and our old schoolroom. Our basement is cut up into small rooms and hallways. It included a long, unfinished portion under our kitchen and dining room. We were using this portion as a shop and for storage. It was approximately 30' by 18'. Since Gary does not do as much woodwork as he would like to, he really did not need the entire thing for a shop. Then, there was a small room that was 8' by 7', a long hallway that ran almost the length of the basement, another room that is 14' by 17', a bathroom in the middle of the finished side, a laundry room (with the furnace and water heater) in the middle of the basement with the stairs running down the back of that. There is also a family room that is approximately 24' by 15'. It is quite a large basement. It just was not cut up in a good way. So, we are starting to re cut it. :) Eventually, it will be much better.

Right now, this is what we've got going on. Gary tore the walls out of the room that was 8' by 7'. 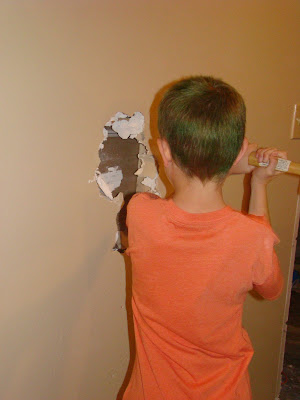 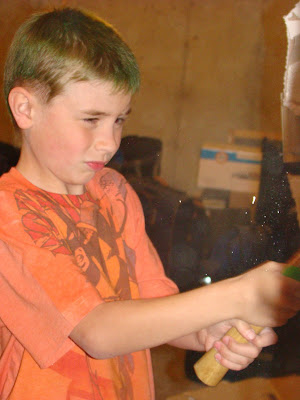 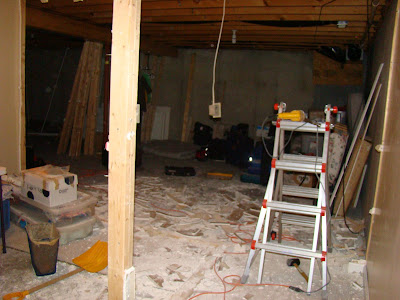 And used the wood he took from those walls to build a wall halfway through the shop. 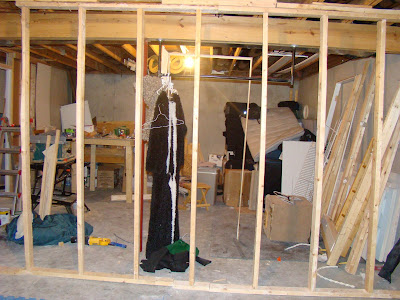 That left him with two doors. He cut a whole for a door in the laundry room, which backs up to the shop. This set up is much better than it was before, since it allows a straight shot out the basement door for larger woodworking projects.

He will be adding the other door at the bottom of the stairs to enclose the workout room. 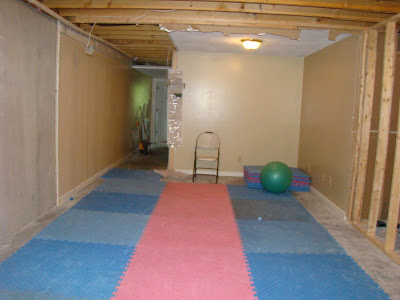 We got used mats from our dojang. All we really have left to do is add the sheet rock, paint, and hang the door. It is already usable. And, it is being used every day. Thanks, Gary! 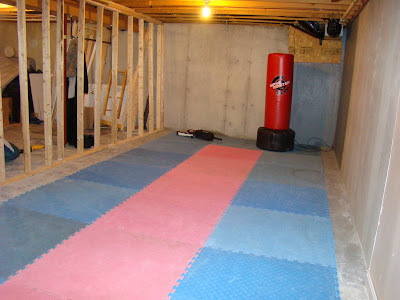