Today was the first day of the second week of school.  Wow!  Look at all those prepositional phrases.  I should have Gabriel diagram that sentence.  At any rate, it went pretty well.  Last week was not a smooth week.  It started and ended with me threatening to put the boys back in school.  This week, I have instituted a 10 strike policy.  If they get 10 strikes, they go back to school.  I know that these are just growing pains, but geez, they've had some major attitude problems going on. 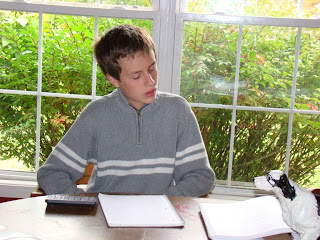 Gabriel started using a calculator for math.  I am trying to teach him how to use a calculator for simple computations when doing Algebra.  He is almost done with his pre-Algebra book.  He's been taking it slow.  I want to be sure he has a good base before he moves on.  He's also doing Life of Fred Fractions and Decimals and Percents on Fridays as a review.  It's going smoothly, so he hasn't forgotten as much as he thought he had.  After he finishes Pre-Algebra, I think we may change curriculums.  He likes his curriculum, but I'd like to see him challenged a bit more.  I may just add another one in there, though, to keep him happy. 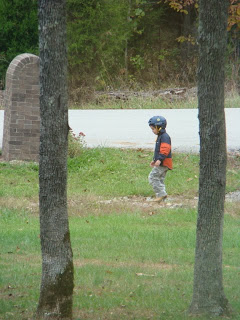 Dominic enjoys learning, and is a joy to teach.  The break really helped him, because it gave his brain time to process the math he had been learning.  He is now flying through the same work he was struggling with before the break.  Someone gave me a bunch of math and phonics workbooks a long time ago (when Gabriel was young enough to use them!).  I really thought I would never have a chance to use them.  However, Dominic likes doing workbooks.  So, in addition to his normal work, he does workbooks that reinforce what he has learned.  I consider it review.  He considers it fun.    In addition to the improvement in his math skills, his reading skill have taken off by leaps and bounds.  He flies through phonics lessons that were a pain before.  He reads things to us constantly.  He seems to be using the 'Xavier' method to practice reading.  His favorite things to read are signs.  Since he finishes his work considerably earlier than the other two, he has plenty of time to explore and pursue his new favorite activities - riding his bike and walking on rocks. 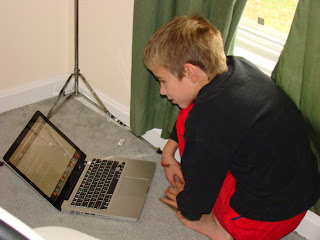 Xavier has struggled to get back in the groove of working.  He enjoys reading the books we have for him.  In fact, he had already read his entire Latin book, several literature books, and a geography book, before we started school.  He does not like doing any writing.  His handwriting is terrible.  I have hope, though.  Gabriel's was terrible, right up until last week.  It has improved so much since June, the difference is almost unbelievable.  I will post an example later this week.  Back to Xavier.  The one thing that I have seen an improvement in Xavier is his ability to do his math.  He's always been good with math.  However, his recall of multiplication facts has been lacking.  Over the last couple months, his brain seems to have dealt with this.  He still doesn't have instant recall, but it is no longer slowing him down for division.  As a result, he can move much faster through a section of math than he was before.  He is also reading much better.  I am sure this is due to the vast amount of reading he did during our break.  Any time he was not playing with his brothers, he could be found with a book.  Since it was only a little over a year ago that he admitted he could read, I am extremely pleased with his progress.  A few of his books are online.  As you can see, it has gotten a little chillier here.  He spent a large part of his day over one of our heating vents.

I try to end the day with something fun.  This might mean science, geography, or art.  Today, we did art. We are restarting the book Drawing With Children.  I love this book and I'm looking forward to getting further in it, this time.  Here are our abstract drawings. 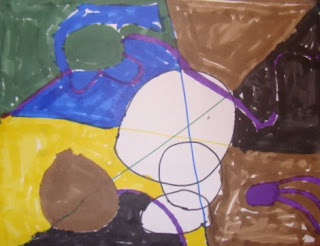 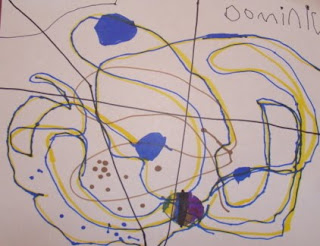 Gabriel's (meant to be viewed on the diagonal)