Our weekend started with a hotel stay.  We are not morning people.  So, we went to the tournament city Friday night.  This particular tournament is only a couple hours away, and in the future, we will probably just drive up on Saturday morning.  For our first tournament, it was good to be relaxed.  A few other families drove up Friday night, as well, and we met at the pool for some time before bed.

The morning of the tournament, we stopped at McDonald's for breakfast.  I only wish there had been a Fourbucks on the way.  Oh well. 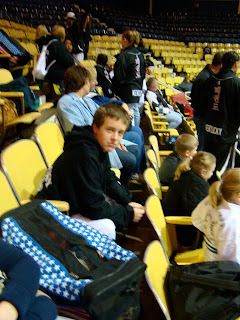 The day started off slow.  One of the best things about tournaments, other than competing, is the time you get to spend with your friends. 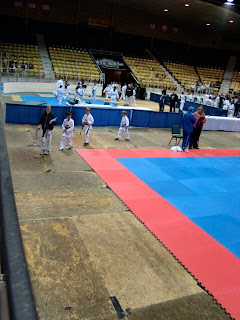 Dominic was the first one in our school to compete.  He was the only one under seven competing.  He's at the back of that line. 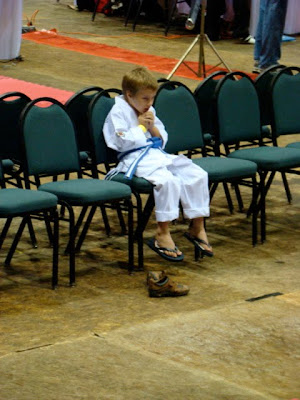 The tournament was held in an ice rink.  It was cold on those floors! 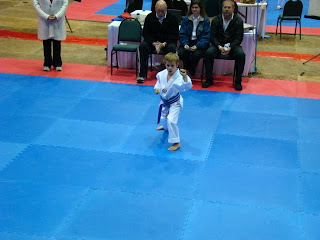 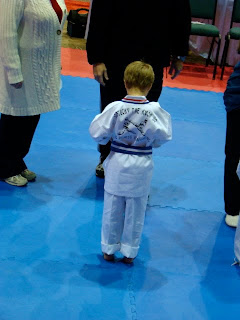 Dominic did a great job and got a bronze medal for his efforts! 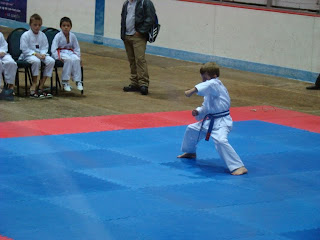 Then, things started getting crazy.  I barely managed to capture any of Xavier's form on film.  He, also, did a great job, although he did not place. Gabriel did his form while I was supposed to be warming up for mine.  Xavier took pictures for me.  I only saw the first part, but I am so proud of my kids for getting out there and overcoming nerves. 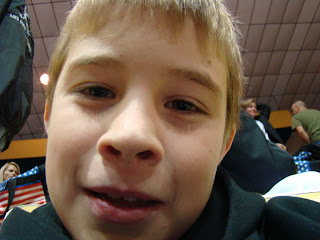 Xavier still had control of the camera. 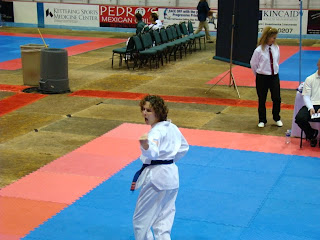 Don't I look fierce?  I rocked my form.  I am thankful that someone took pictures.  I see room for improvement.  Dominic was the only one to place, but I think we all did well. 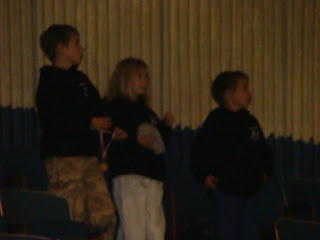 The kids spent the rest of the tournament watching other people and playing with their friends.  It was a great time for everyone.  We are looking forward to next weekend's tournament.  It will be even crazier, since we will all five be competing.
Posted by Kristina at 11:49 AM

Email ThisBlogThis!Share to TwitterShare to FacebookShare to Pinterest
Labels: taekwondo