Hope For the New Year 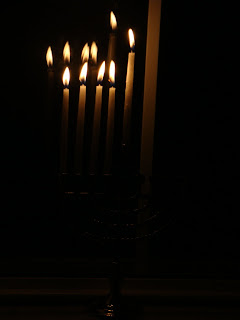 For me, the end of Chanukah (the Festival of Lights), and the Winter Solstice, signal the coming light.  The knowledge that each day brings just a bit more sunlight to my world is a wonderful thing.  It gives me hope for the coming year.  The Winter Solstice signals the birth of a new year.  It celebrates the end of the darkness.  For me, that is wonderful.

Wishing you all a Merry Christmas, and a wonderful winter!
Posted by Kristina at 9:24 PM No comments:

Email ThisBlogThis!Share to TwitterShare to FacebookShare to Pinterest
Labels: seasons 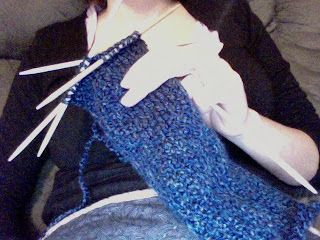 My work in progress.  I started learning to knit in August or September.  All through September, October and November, I knit.  I knit and knit and knit.  So far, I haven't gotten burnt out.  I have figured out that my skin doesn't like acrylic.  It's causing my psoriasis to really act up.  I'm currently making sure to have a barrier between my skin and the yarn.

This is a gift for my cousin.  I'll post pictures when they're done.
Posted by Kristina at 12:17 AM No comments:

Email ThisBlogThis!Share to TwitterShare to FacebookShare to Pinterest
Labels: knitting

Sometimes, life gets rushed.  It seems to always get so rushed for us at this time of year.  This year, we had a tournament to go to the weekend before Thanksgiving.  Since we were already going to be partway there, we chose to continue on to my mom's house, although we had originally planned to stay home for Thanksgiving.

After more than a week away from home, we were all happy to be home.  We arrived home Sunday evening.  Monday, I took Professor X to the doctor, and Gary took the truck to the doctor.  Tuesday, I had a job interview.  Wednesday, I had training for my new job.  Thursday, I got to stay at home with my boys until evening, and Friday, we had co-op.  Needless to say, we did tae kwon do every night that week.  By the end of the week, I was exhausted.  I just wanted to stay home.

After two weeks of keeping tae kwon do to a minimum, and focusing on family, I am slowly starting to feel more like myself.  But, we need to slow down.

As the days go by, we are enjoying our slowing down time.  The boys are playing a lot of games, in addition to catching up on school work.  We are spending time making Christmas gifts for family.  The boys had their first sewing machine lessons on Saturday.  We are reading together.

We are being a family again.  Of course, we are still going to tae kwon do.  Fortunately for my need to slow down a bit, the holidays are coming, and they limit the amount of classes available.  After the new year, we'll be back in full force.  In the meantime, we'll take it slow and enjoy each other.
Posted by Kristina at 10:31 PM No comments:

It's All Fun and Games

Our family loves board games.  Our favorite games are strategy games.  We've been playing Settlers of Catan for about 6 months, approximately once a week.  Of course, once we get going, we might play three games in one day.

Recently, we introduced the boys to Risk.  We've had this game for many years.  It was Husband's before we got married, but it's been taped up through half a dozen moves.  For obvious reasons, we never untaped it.  Have you ever seen what young children can do with a Risk game?  At any rate, we pulled the game out, cut the tape off, and played a game.  The Youngling spent his time organizing his troops- all those not being used on the board.  He had massive, intricate battles going between the Brits and, at various times, the French, the Romans, and the US.  The rest of us played.  I lost quickly, and happily went about my business, while Husband proceeded to trounce the older two boys. 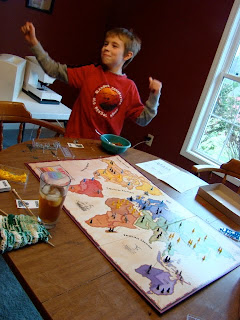 Each subsequent game has ended quickly, with Husband the victor, until last night.  Last night, we set up the game in front of the fireplace.  Youngling decided to join the game.  Husband got knocked out of the game before the end of the fourth round.  Youngling was going down fast, and I suggested that Husband help him out.  Next, I was knocked out.  Youngling managed to capture all of North and South America, and Professor X was quickly losing ground in Africa and Asia.  The Man Cub held everything else.  Suddenly, we realized that it was 9:30.  We sent everyone to bed, and moved the game to the kitchen table. 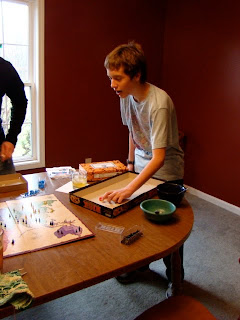 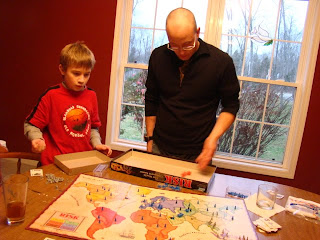 This morning, the boys immediately wanted to play.  Unfortunately for them, I needed their help cutting coupons and cleaning house.  After much cutting, vacuuming, and straightening, they got down to business.  Youngling went after Man Cub.  Man Cub was not going down without a fight.  After all, what twelve year old wants to lose to his six year old brother?  Finally, when Youngling was on the verge of victory, he fell to the cards.  Man Cub got 60 more men and wiped Youngling off the map.  It was time to take out Professor X.  Professor X had two territories left, and felt that Man Cub should not overextend himself by attempting to wipe him out, thereby giving Professor X a chance to turn in his cards.  No such luck.  Man Cub wiped the board with Professor X and came away the victor.

This game took approximately 12 hours, total, to play.  That's 12 hours that a twelve year old, nine year old, and six year old were intensely involved in strategy, math, and fun.  The older two frequently commented on how wonderfully old fashioned, and like a movie, it was.  I was happy, and so were they.

There will be another board game under the tree this year.  We just have to figure out which one.
Posted by Kristina at 11:15 PM No comments: