Too Much Harry Potter

Dominic just asked, "Mom, do we get post on Sunday?"
Posted by Kristina at 3:05 PM No comments: 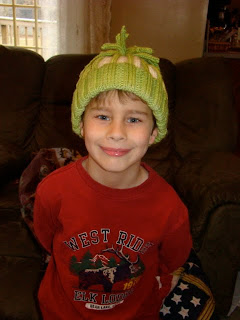 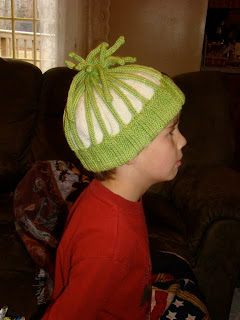 The Nickster wanted me to make him a hat.  I found this on Youtube and thought it would be a great one for him.  Off we went to the local fiber store (one of Dominic's favorite places), so that he could pick out some yarn.  This is what he came up with.  It took a little longer than Xavier's toque, but it was totally worth it.  He loves it, and so do I. 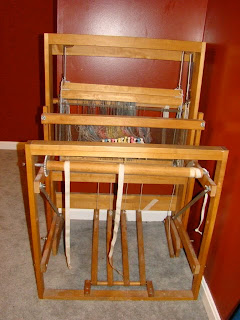 Email ThisBlogThis!Share to TwitterShare to FacebookShare to Pinterest
Labels: gifts, me

We started the day by doing school in my bed.  Gabriel woke me up by bringing me breakfast in bed.  Xavier and Dominic wanted to get school done as fast as possible, so they brought their books into my room.  After school, Dominic and Xavier headed outside to play.  They did a lot of sledding.  Then, Xavier decided he was cold and came inside, while Dominic continued to play.

So, what do you do on a snowy day? 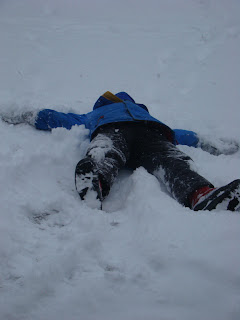 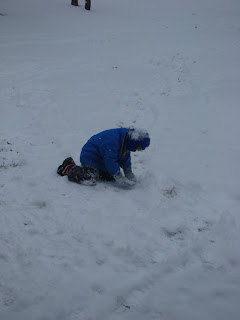 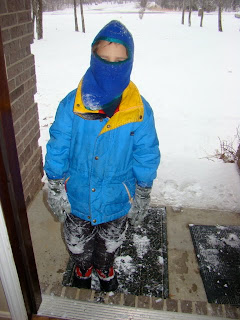 Ring the doorbell, so Mom can let you in. 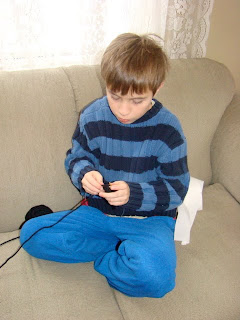 Realize the toque your mom made you doesn't keep your neck warm, and decide to knit yourself a scarf.

Posted by Kristina at 5:39 PM No comments:

Shortly before Christmas, Gary introduced the boys to this version of "The Twelve Days of Christmas."  Xavier promptly requested a wool toque for Christmas.

Shortly after I started knitting in August, I came across this book while at Half Price Books.


Since everyone in my family is a rabid Harry Potter fan, I snatched it up. I'll admit that I don't like all the projects. I love the robe that will never happen, because I don't have the patience for long projects. I also love the clock afghan that will never happen, for the same reason. However, I knew that my boy would love that wizard hat. So, I went to the knitting store, and bought some yarn, two days before Christmas.

I was already in the process of making the Nickster some requested mittens, so I had to wait until Christmas Eve to cast on.  In fact, I did not finish the hat until Christmas Afternoon.  However, Xavier couldn't have been happier. 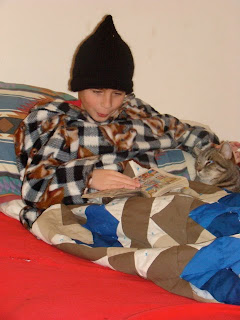 Tonight, he chose to wear it to bed, to keep from losing his warmth.  *snort*  He also made his own "Snuggie"

out of his robe.  That boy cracks me up. 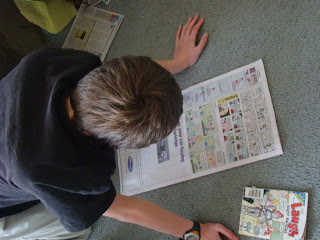 The age old ritual of reading the Sunday comics: the race to the end of the drive, dibs and second dibs, the quote, the laughter.  It all makes Sunday better.

Posted by Kristina at 9:45 PM No comments:

Email ThisBlogThis!Share to TwitterShare to FacebookShare to Pinterest
Labels: 365 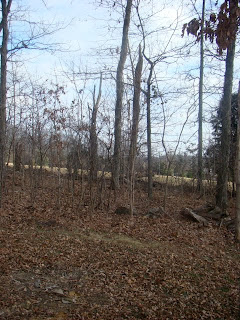 You look so warm,

But you're really freezing.

Email ThisBlogThis!Share to TwitterShare to FacebookShare to Pinterest
Labels: seasons

The weekend before Thanksgiving, we went to a tournament in Decatur, Illinois.  There was fun to be had for all.  Our hotel room was on the end of a row.  On one side was the hallway.  On the second side, were the elevators.  On the third, there was a sort of landing with couches, and balconies.  It was very difficult getting to sleep that first night.  There were people running around, even playing hide-and-go-seek outside our room.  We finally managed to get some rest, and boy were we glad!

Saturday morning dawned bright and early with a crew that just couldn't sleep.  We all got up and hit Cracker Barrel for a good breakfast.  We knew eating would be hit and miss for the rest of the day.  With five of us competing, plus wanting to watch all of our friends, it can make for a crazy, fun, exhilarating, tiring, and just plain great day.

Youngling is the youngest competitor at our school.  As a result, he is always the first to compete. 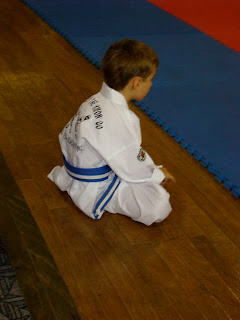 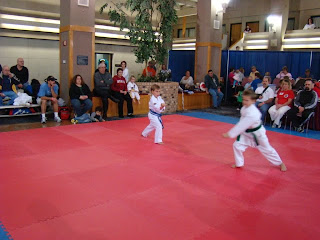 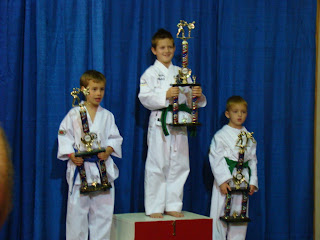 He took second in forms.

Next up was Professor X.  He and Shady Rooster got some hang out time watching other people before he had to head back to the holding area (sounds like something they hold cows in, huh?). 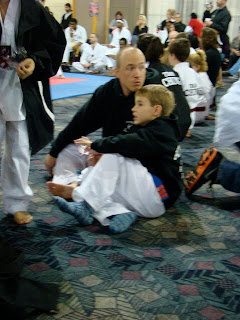 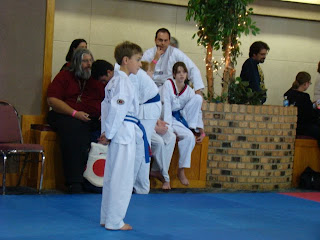 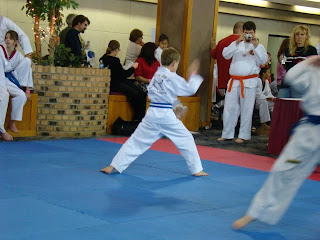 Look at that front stance, and snap. 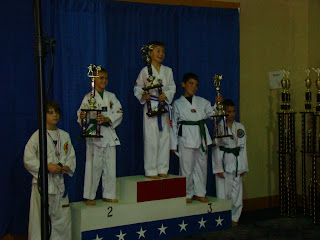 That's why he took 1st in forms.

The Man Cub put in his best effort.  Unfortunately, he did not get some pertinent information.  As a result, his second match ended in him losing.  He did not place in forms. 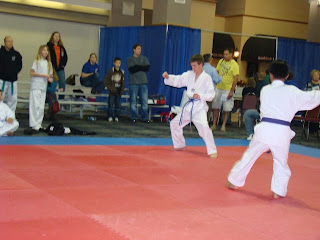 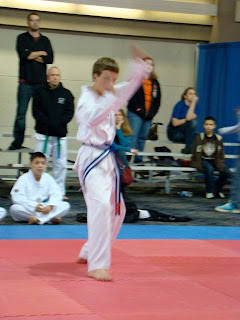 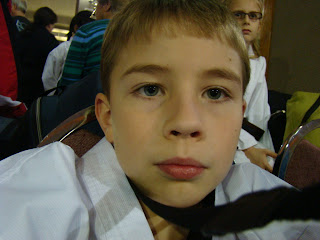 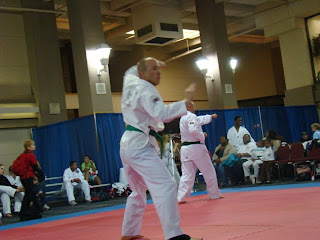 After lunch, it was time for sparring.  Only Professor X and Shady Rooster sparred.  Poor Professor X.  This was such a great learning experience for him.  He came away with a 'pity' medal and a determination to learn enough to do better next time. 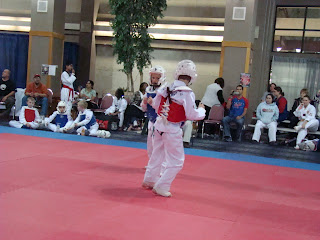 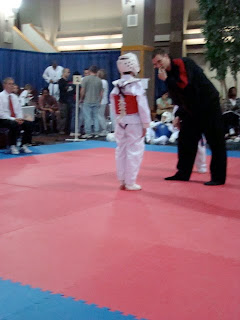 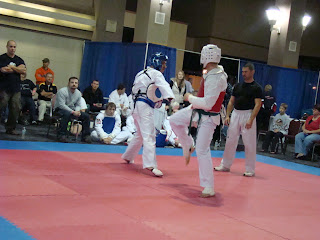 The Shady Rooster is seen here, fighting a Transformer!  That's right, folks, the Transformers made an appearance at our tournament.  Who knew they were real?  There was another guy that had matching gloves and foot guards.  I seriously was rolling in laughter.

Sunday dawned too early, after a late night of food and fun with friends.  Board breaking was on the slate, and we had to get ready.  It was absolutely crazy.  There were a lot of us competing, and not nearly enough board holders to go around.  One of our black belts had to wait to do his competition, while another black belt did his.  It was crazy and fast paced.  I have no pictures of the Shady Rooster or myself.  The Shady Rooster got silver, and I got gold. 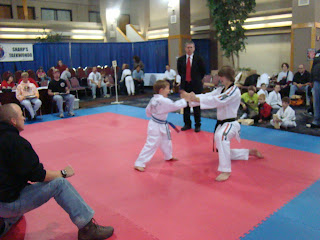 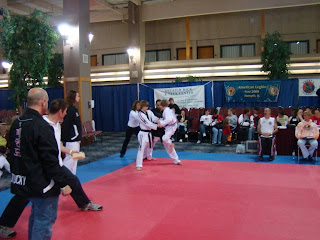 or X got gold. 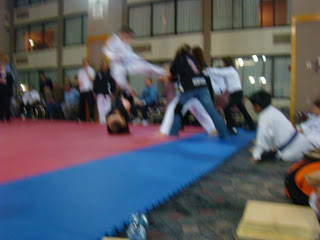 Man Cub got bronze.  We were particularly proud of this one, since he had 14 kids in his division, and his division is a tough one. 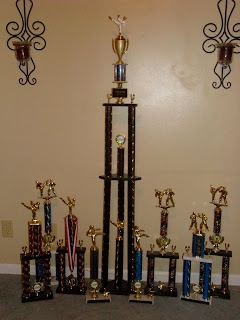 Posted by Kristina at 6:10 PM No comments: