When we first moved into our house, I thought that this hallway was a huge waste of space.  I still think that they could have designed the basement much better, but we are slowly remodeling the spaces.  Sometimes, we are ripping out walls and building new ones to make the space better.  In this instance, I have just repurposed it.  I originally planned to put shelves under the stairs to hold books and board games, then add a reading nook.  After all, this hallway is a good five feet wide.  Surely, something could be done to make it useful!  I am all about not wasting space.
Originally, we were using it as storage space.  We just had this bureau, which I use to store my craft supplies.  However, when Gary started remodeling the dojang, this space suddenly became a mess of storage.  This is after I had started organizing. 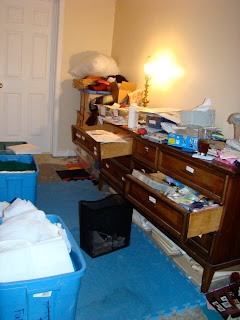 This picture was taken mid-organization. 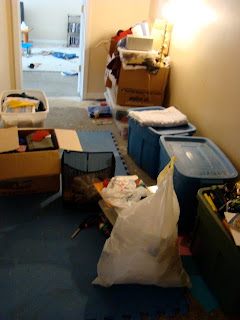 You must understand that I organize in a specific way.  First, I take everything out.  Then, I slowly put it all back in, or throw it away.  This way, everything gets put away nice and neat.  Unfortunately, this is a very long (did I mention slow?) process.  Anytime a member of my family (starting with my grandparents, all the way down to my smallest cousin) hears that I'm organizing, they know that my house will not be available for company for some time to come.
After approximately two months weeks, I got the space completely cleared out.  We went to my mother's for Thanksgiving.  We drove our gas guzzling beauty to Oklahoma, because we knew we would need the room on the way home.  We barely fit everything in the back of that thing.  Two of the things we came home with are my grandmother's sewing desk, and her sewing machine, both of which were damaged in a house fire. 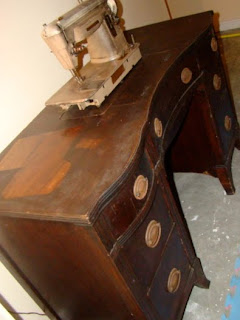 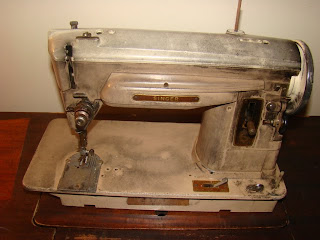 The sewing machine will have to be cleaned.  I just don't know how to do it.  I don't know if it can be repaired, so right now, I am just using it as decoration.  Let's face it, I would probably never use it, anyway.  I love my sewing machine.  (Remind me to tell you the story of Xavier and Dominic 'fixing' my sewing machine someday.  It's one for the history books!)  However, the sewing desk needs to be stripped and re-stained. 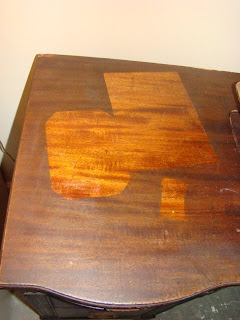 You can see where something was sitting on top of it, and all the smoke damage around it.  The drawers will need to have shelf liner put into them, as they just leach soot.
Since I didn't want to mess up anything I was sewing, but I wanted to start using the sewing desk immediately, I covered it with an old sheet.  It will work for the nonce.  When the weather gets better, I'll take it out in the garage and teach the boys how to strip, something I learned in my dad's piano workshop. 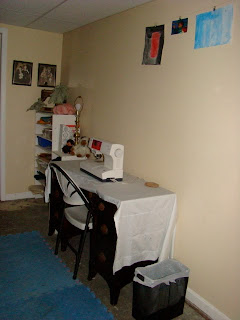 I needed shelving in my 'sewing room', so I rounded up some old shelves that we've had for 9 years.  I sincerely never expected them to last this long.  They are very cheap particle board that have held everything from clothing, to toys, to tools, to food, to sewing supplies.  They have resided in 5 states.  They have survived 7 moves.  I am actually very impressed.  They don't look great, but they are still functional.  And, since I was trying to make something out of nothing... 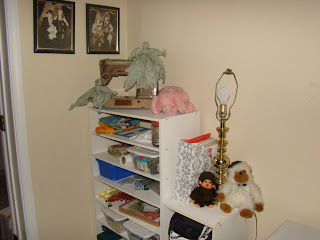 I decided to use all those little precious objects that had no particular space in my home, to decorate with.  The objects all have special meaning to me, but were getting lost in my house. 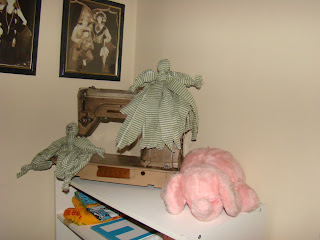 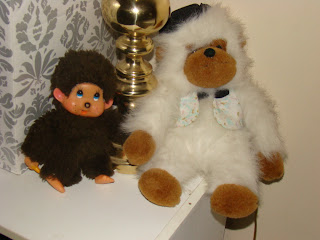 These two little fellows also have special meaning.  The Thumkey was another childhood toy.  Yanis is on the right.  Gary won him at a street fair, in Greece, while we were dating.  He was our first child.  We named him Yanis, because it seemed that half the men we met in Greece were named Yanis.
Finally, at the top of the wall, I strung a wire, and have started hanging the kids' artwork from it.  Soon, it will be full, and I'll have to start paring down again. 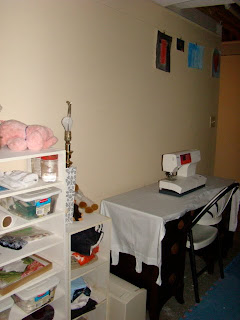 Email ThisBlogThis!Share to TwitterShare to FacebookShare to Pinterest
Labels: me, sewing