Yesterday, Gabriel and I went to a book signing with Rick Riordan.  I had gone on Monday to get a line number.  Our number was 85.  I did not think this was too bad a number, especially after seeing people with numbers in the 400's.  We arrived at about 5:45.  The signing was supposed to start at 6:30, but I was not expecting it to actually start until close to 7.  This is what we found when we arrived. 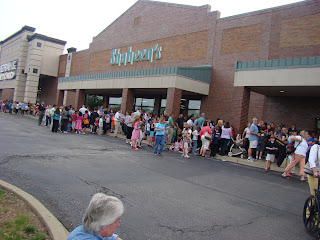 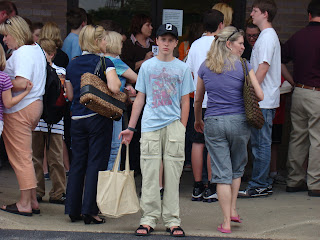 Gabriel kept telling me he was bored, until I pointed out that he had 6 books in his bag he could read. 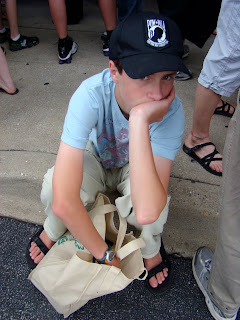 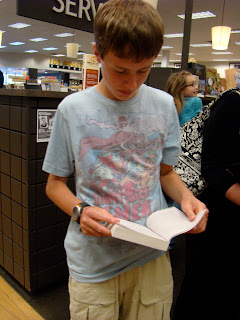 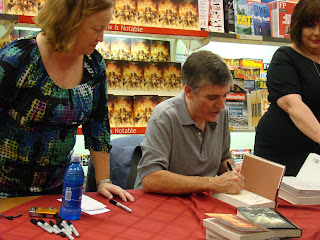 The line snaked around the store.  We caught occasional glimpses of The Man while we were waiting (and he is fast!  We only waited for about 15 minutes, and we were number 85!).  At one point, Gabriel was afraid he was going to either hyperventilate or throw up.  Ah, the wonders of authors. 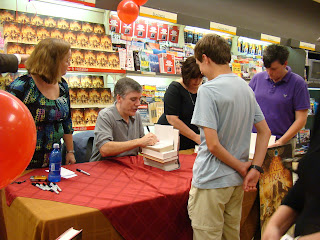 When Gabriel finally got up there, he had a question to ask.  Unfortunately, it took him until Mr. Riordan was signing Gabriel's last book for Gabriel to finally spit out his question.  He was so star struck. 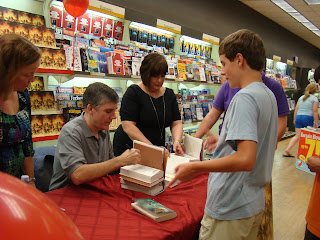 Mr. Riordan took it in stride, answered his question, looked him in the eye, and was extremely nice.  It probably helps that he has two sons about the same age as Gabriel, and taught middle school for 15 years.
It was a good experience.  Gabriel will probably frame "The Lightning Thief," as it was both a birthday present from my sister, and now holds her inscription and Mr. Riordan's inscription.  He may even put it in a fireproof vault.  This is definitely something we will be doing again.  Now, if I could just figure out some way for him to meet the author of "Armorica."
Just a note: Our family loves Mr. Riordan's books.  "The Lightning Thief" was a birthday gift from my sister, but we have subsequently bought all the books in the Percy Jackson series, and "The Red Pyramid."  For those wanting to know, yes, "The Red Pyramid" is just as good as the Percy Jackson series.  These would be a good gift for anyone interested in mythology, action, adventure, or just a rollicking good story.
Posted by Kristina at 10:35 PM