The Birth of a Friendship

I remember sitting in my best friend's living room. Her mother was sitting in one of the dining room chairs, and we were ranged around her on the floor. I was twelve years old. We were listening to her read Dragonsong

. I fell in love that night. I know how old I was because I still have my set of the Harper Hall Trilogy that my parents gave me on my thirteenth birthday. 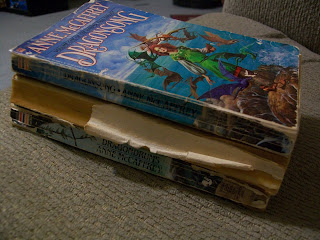 I still have that trilogy, and they have been well loved. They have been all over the world, and have introduced science fiction to my children. I quickly moved on to her other Pern books, and introduced them to my brothers and father. Fortunately, I had the forethought to write my name in all the books. My brothers were not able to claim them.

(*ahem* These really were my books. Anyone who tells you that I had the bad habit of adding my name to any and all books that fell into my hands if full of bunk. And, if the random book says "Kristina Swan", ignore that. He was a childhood crush. It doesn't negate my claim.)

Throughout my life, I have turned to Anne McCaffrey's books. I have worked my way through all her Pern books, right up until the ones she wrote with her son. I have not started those, yet. I loved The Rowan

series. Oh my. My father did not like them as much. He felt that she was too wordy. I do have a partiality to Pern. Who wouldn't? But The Rowan series speaks to me.

! Oh, had I only perfect pitch so that I could be a Crystal Singer. Sure, I could be a Talent, but there's no way I could even dream of being a singer.

And what sci-fi junky hasn't thought about what would happen if aliens invaded the Earth? The idea that humans could fight back, and even make a better life for ourselves on another planet, is what made Freedom's Landing

so fascinating for me.

Then, as a homeschooling mom, I was introduced to something I didn't even know Anne McCaffrey had done. It isn't science fiction, this one. It is historical fiction of a fantastical bent that only Anne McCaffrey can accomplish. If your children have not read Black Horses for the King

, I highly recommend it. It is one that will reside permanently on my shelf, just as her other books do.

I was sad to hear that Anne McCaffrey died. It hurts. I am so thankful to her for writing. You see, that night in C's living room, I was experiencing the birth of a lifelong friendship. Thank you to V for letting me be part of your family's read aloud. Thank you to Anne McCaffrey for introducing us all to Pern.
Posted by Kristina at 8:55 PM

Email ThisBlogThis!Share to TwitterShare to FacebookShare to Pinterest
Labels: reading