Everyone has their own way of learning multiplication. There are computer games, flash cards, stories, etc. Our family has done it all.  Now, it is Dominic's turn to learn multiplication. He's absorbing them pretty quickly, but I wanted to give him the opportunity to have some fun. He's been using Timez Attack. The only problem is that he's horrible at ten key, so he can't get the answers in fast enough without help. That means that he doesn't get to play as often as he wants. It also means that he hasn't learned his 6's yet.

So, instead of drilling him verbally like I've been doing with the other numbers, I made him a stack of notecards.  Xavier immediately grabbed them and told Dominic that they were going to play Timez Attack. 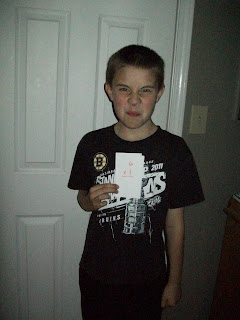 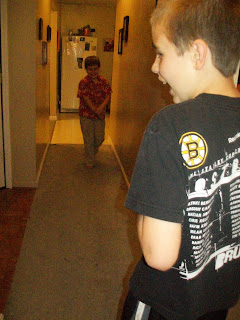 Dominic finds him, and Xavier chases Dominic until Dominic says the answer to the notecard being held up.

I love my kids so much.