For those of you who have never heard of NaNoWriMo, it's something crazy people do every November. We look at our busy lives and say, "I really don't have enough to do; I think I'll add writing a novel to the mix." Prior to this year, I've only even thought about it once, and abandoned the project on the third day. However, this year I'm going the distance. And, I'm dragging my kids along with me.  NaNoWriMo hosts a site for children, called NaNoWriMo's Young Writers Program. I have to admit that my children were not entirely excited about the prospect, at least not Gabriel and Xavier. Dominic, the one in school, was thrilled, so long as he didn't have to write during the week.

Now, the adult NaNoWriMo program requires that you write 50,000 words during the month of November. The young writers program allows you to set your own goal for word count.  They have recommendations which should be attainable for most students.

Dominic chose to go with the low recommendation of 300 words. After all, he is in school all day.  Xavier chose to ignore the word count idea all together.  Gabriel has chosen to go with the middle goal of 10,000 words.

I find that last one most interesting. Gabriel is an amazing creative writer, but he resists writing. Over the last 6 months, he has slowly but surely remembered his love of creative writing. Now, he is putting his imagination to work, and I have enjoyed reading his composition. For the first time, he is wanting us to read it, and it really is good. I'm so happy that I dragged him into NaNoWriMo.

But. What I find most interesting is Xavier's reaction to NaNoWriMo. I think his story has been fermenting in his mind while he does other things, because this is what I woke up to this morning: 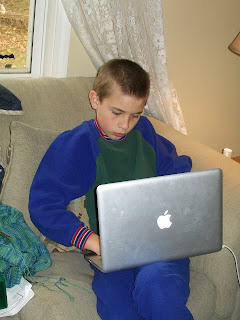 Xavier is usually the last one up. Today, he got up early, went straight into the living room and started writing. Two hours later, he's still writing. Granted, he's taken a break to eat and empty the dishwasher, but nothing else.   Xavier's even asked that he be allowed to write on his blog. Woohoo! I'm certainly happy with our NaNoWriMo adventure so far.  It's accomplishing for them what I wanted, a love of writing.

It's not too late to join! After all, it's only day 3. Join us in our quest to write a novel this month!
Posted by Kristina at 10:17 AM