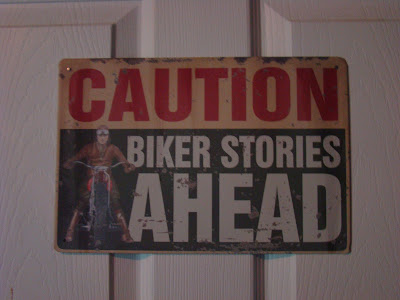 When Xavier was little, he had a motorcycle. We're pretty sure it was illegally modified. It was loud! One night, when it was time for bed, I asked him to park his motorcycle for the night. As he zoomed around, he told me that his brakes had failed. "But," he said, "it's okay. I have an emergency parachute."

As he pushed the button for the emergency parachute over and over again, he announced, "The emergency chute must have failed. I'm sorry; I can't stop the motorcycle."

He was 2 1/2. He has been fascinated by motorcycles for as long as I can remember. Recently he became interested in the night sky. The idea for Xavier's space was born. 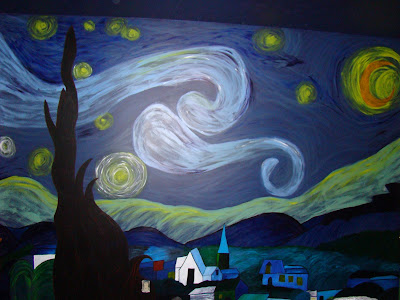 First up, I painted "Starry Night" on his biggest wall, directly opposite his wall. 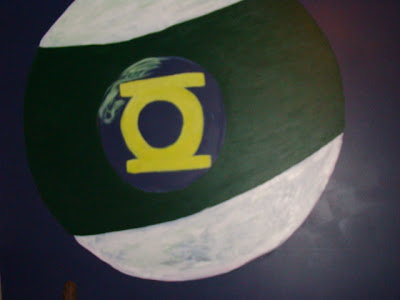 Mogo went behind his bed. Remember, this is Xavier's space. It has imaginary planets. This is not a finished picture. The space around the green lantern symbol is all white, now. 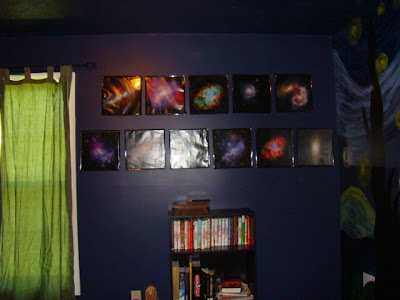 Beside the Starry Night wall went 11 pictures. They are from an old calendar. 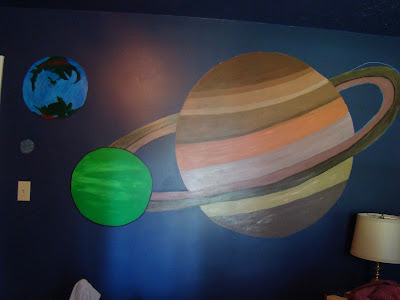 To the right of Xavier's bed, I added a drunk Saturn. How else can you explain the wobbly rings?
Oa, another green lantern planet, Pern, and the Death Star joined it. 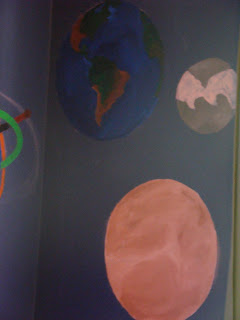 On the same wall as the calendar pictures, I painted Earth, Tattooine, and Venus. And then, I got stuck for what to paint for the one planet remaining. I could not come with a good idea. It was originally supposed to be Mars, but Mars looks so similar to Venus that I really didn't want to do that. So.... 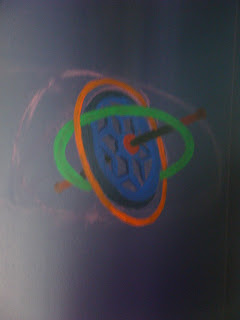 I painted a gyroscope. I need to get rid of the chalk on the wall, but I love the gyroscope. 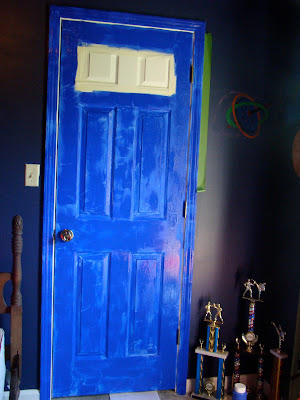 I'm working on my next to last project. Does anyone know what this is going to be? After I finish this, I will add glow in the dark stars to the ceiling. But, oh, this. This should be done tomorrow. I hope so. I'm very excited to be done with Xavier's room.
Posted by Kristina at 11:23 PM