I spent the evening grocery shopping. The boys spent the evening playing video games. While I was on my way home, I decided the boys would be putting away the groceries and making dinner while I took a bath. After I told them this plan, they shooed me out of the kitchen and took over. (I have good kids.) As I walked down the hallway, I heard Xavier say, "Let's watch Mythbusters while we cook dinner." Yup. They learn by example.
Posted by Kristina at 9:51 PM No comments: Links to this post 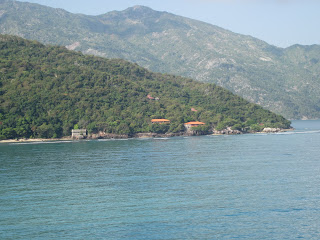 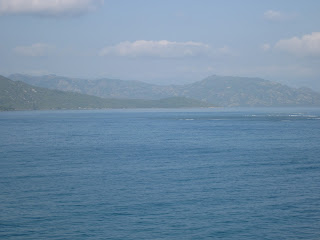 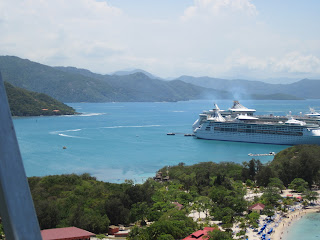 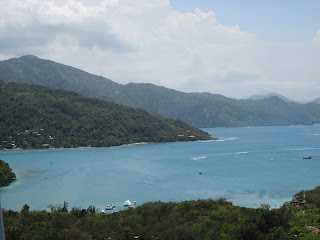 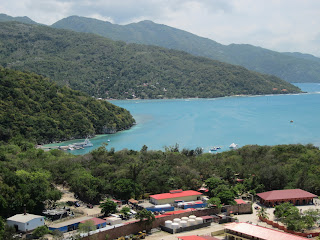 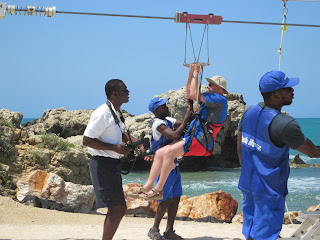 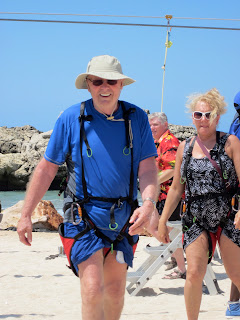 The second day of our cruise, Gary, his mom, and his dad went ziplining in Labadee, Haiti. Doesn't it look fun? I fully intend to take part in this the next time we go on a cruise.
Posted by Kristina at 11:18 PM No comments: Links to this post

Email ThisBlogThis!Share to TwitterShare to FacebookShare to Pinterest
Labels: vacation 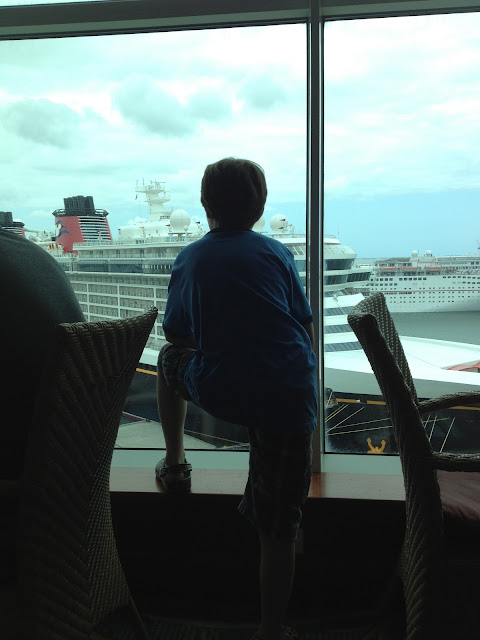 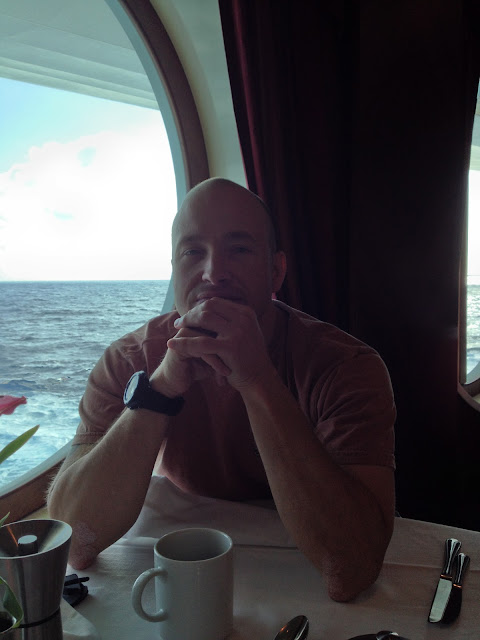 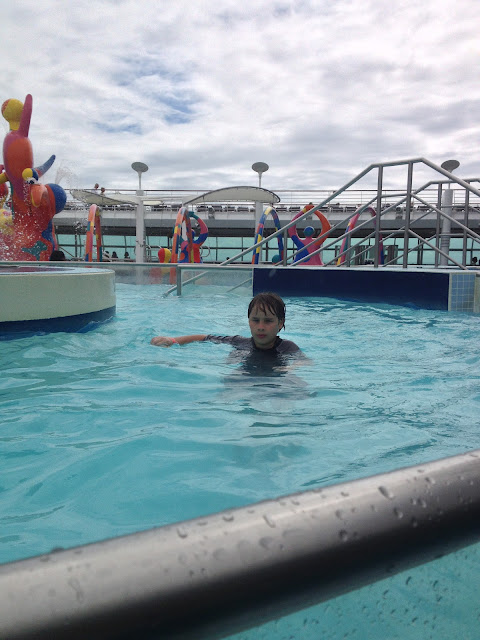 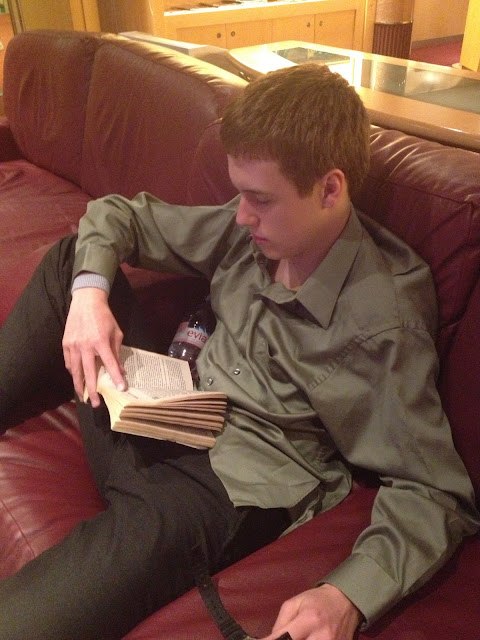 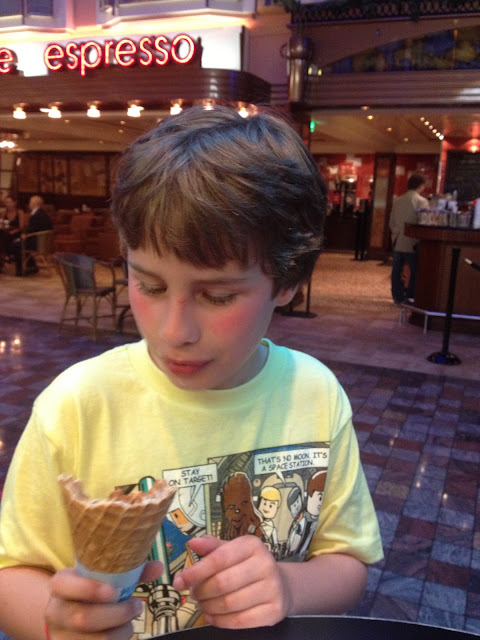 We went on a cruise for our vacation this year. I'm happy to say it did not turn out like the last one. (You really want to read that. It's hilarious. And, I can thankfully say that it is no longer the worst cruise I can imagine!) Our cruise was wonderful. It was relaxing, and everyone had a good time. Gabriel even had a good time, even though he spent the first morning throwing up because he didn't take his medication fast enough after waking up. After Gary found him some wonderful medication, Gabriel spent most of that and every evening in the library. I don't have any pictures of Xavier from that day, since he spent most of his time on board ship with the teens.

This is Gabriel's miracle motion sickness medication. It works amazingly quickly, even for me. While I don't get motion sickness on board ships or planes, I do in the car. However, I am unable to take medication for it because it knocks me unconscious. This stuff was fast and effective, and I was able to stay awake.
Posted by Kristina at 7:36 PM No comments: Links to this post

Email ThisBlogThis!Share to TwitterShare to FacebookShare to Pinterest
Labels: vacation 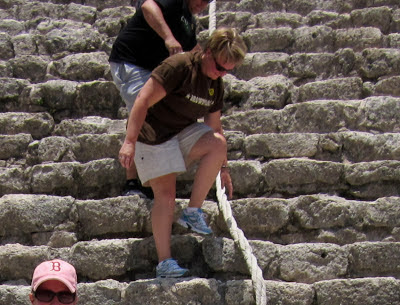 We recently got back from a cruise, which I'll share more about soon. I just had to share this, though.

One day, as we're waiting in the hallway to leave the ship, Gary brought my attention to the shirt of the girl in front of us. She was wearing this

shirt, and the back of it says, "I aim to misbehave."

Well, of course, I had to let her know how much I liked her shirt. She was thrilled that someone knew what her shirt was about. We ended up on the same tour, and talked a bit further. We didn't become Facebook friends or anything, but it's always fun to find someone who is part of your weird

Posted by Kristina at 6:16 PM No comments: Links to this post

Email ThisBlogThis!Share to TwitterShare to FacebookShare to Pinterest
Labels: Firefly, life, me

I grew up in Oklahoma. I can remember watching a movie about how tornadoes form when I was in 4th grade. It was a reel to reel in black and white.

I remember sitting in our hallway, listening to the radio, waiting for a tornado warning to pass. My dad, a fireman, mentioned that the old Indian lady that lived next door told him there had never been a tornado in our area, according to the folk lore of her tribe. According to them, the lay of the land just wasn't conducive to tornadoes. That day, my dad caught a black widow spider in a jar as we sat in the hallway.

When I was in 6th grade, I detested tornado drills because our safe place was the boys' bathroom. It was so stinky in there, and we had to kneel on the floor. It was disgusting.

When I was a teenager, we moved to another house, about 30 miles away. It had a storm cellar. We only went into it once. Why? Probably because it was full of spiders and we were afraid of being bitten. It certainly wasn't because tornadoes didn't happen in that area. My grandmother lived in a trailer about a mile from us. One day, a tornado went down her street. Had she stepped outside, she probably could have seen it. She was too busy canning green beans, though. She later said that if the Lord wanted to take her he could do so, otherwise she had work to do. It wasn't like she had anywhere to go, anyway.

I don't live in Oklahoma anymore, and I don't watch the news. I get almost all my news reports through Facebook. So, when I started getting messages and texts from family from around the country asking about my sister, I immediately called her. Apparently, I am the only person that was able to get through. When I talked to my mom a minute later, she had been unable to get in touch with my sister. Social media allowed me to be in touch with all my loved ones who were worried. We were able to communicate from afar and in mass.

All these many years later, two major tornadoes have take a similar path through Moore, OK. My sister lives there. Many of my loved ones live there. I grew up my with my brother-in-law's family, of which there are many members with young children. Yesterday's storm hit one of their houses, and the school of the same family. The mom, son, and daughter were at home, but although their house was flattened, they are all safe.

Today, my family has much to be thankful for. We grieve for the loss of so much life. I'm thankful that *only* 9 children in an elementary school died. I'm so incredibly thankful for all those tornado drill, and that they work.
Posted by Kristina at 11:51 AM No comments: Links to this post

I remember talking to my grandmother about this twenty years ago. I was 16, 5'4” with DD breasts, and only weighed 90lbs. I was complaining because I had a hard time finding bras that fit. Actually, I couldn't find *any* that fit right. Bra companies just didn't make bras that fit a 32DD. (They barely make them for 34DD. And don't get me started on nursing bras!) She told me that I was shaped like her mother-in-law. Apparently, my great-grandmother had been skinny all her life. By the time she died, she weighed over 300 pounds. She was so happy to have some weight on her that once she finally started gaining weight, she just ate and ate to continue gaining weight. She died 34 years ago. Obviously, body image issues are not a new thing.

Less than two years later, I had to get a weight waver to join the Navy because, at 93 lbs, I was 3 pounds underweight. The Navy wanted to be sure I didn't have an eating disorder. I did not. I did have a crazy run away metabolism that I passed on to two of my three children. In bootcamp, I had another girl say to me, “How do you even walk around on those sticks?” I'll never forget that. I was flabbergasted. Why would you say something like that to someone?

My older brother was even skinnier than me. At the age of 19, he had a 24 inch waist and a 36 inch inseam. Looking back, I have no idea how my mother found pants that fit him. I'm pretty sure she didn't.

You see, my oldest two children wear sizes 27x32 and 24x32 respectively. The older one always goes up a waist size because he has large thighs and doesn't like to feel constricted. The younger one can only buy clothes at one store, and he's growing at a rate of about an inch a month right now, mostly in his legs, so I can't look forward to the fall.

This brings me to the reason for this post. Our family took a cruise in late April. I forced my older two children to buy pants that fit. We searched high and low to find a pair of khakis that would fit my 15 year old son. We finally found a pair at Abercrombie and Fitch. That's right. The pariah of stores. Of course, this was before all the hoopla, but when we got back, I planned to buy more pants for him. And suddenly, I have to decide whether to financially support a store that has openly stated they don't want fat people shopping there or not have clothes that fit my children. And believe you me, I would prefer to pay less for my growing boys' clothing!

It didn't take me long to make my decision. You see, other manufacturers, stores, and brands take an active stance on size every day. They don't come out and say, “You're not a large enough share of the market for us to make clothes for you,” but they sure do live it. If only a few brands would make things for skinny kids, I could make the choice to shop elsewhere.

But then something happened inside my head. I started thinking about Chic Fil A, Pro Life emergency room doctors, religious institutions mandating that no tubal libations will be performed in their hospitals, and businesses refusing to take part in gay weddings. I wondered what would have happened had Chic Fil A been the only grocery store in the area, instead of one fast food chain among many. I wondered whether or not a doctor would be held liable for not performing a life saving abortion if they were they only doctor at an emergency room. I wondered about the many babies that would be aborted because a religious institution refused to allow their mothers to have tubals while they were in the hospital to have a c-section. And I wondered what makes it okay for a person to make a business decision based on a religious belief, but not a personal dislike.

Suddenly, I realized that I could not shop at Abercrombie and Fitch anymore. I will have to take my business to our local tailor. I will not compromise my principles because it is the easy thing to do. Now, if only some of the other manufacturers would start making clothes for skinny people, I'd be happy. Not everyone is big *and* tall. Some are just tall. Maybe I need to talk to some basketball players.
Posted by Kristina at 9:47 AM No comments: Links to this post