Musings of an Almost-Convert Part 3: Buddhism 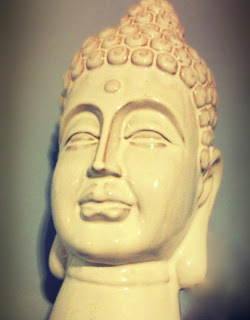 After I left Christianity, I made a brief stop in Wicca.  I found Wicca very interesting, however it became clear very quickly that Wicca was not for me.  There were two other religions that I had found interesting and curious since I was a young girl.  The first that I explored was Buddhism.  I was never interested in the form of Buddhism that included multiple gods.  Instead, I was specifically interested in the idea of attaining peace and releasing one's worries.

The first thing I learned about Buddhism is that the way to enlightenment is not an easy path.  We have so many worries, woes, pains, frustrations, and fears that it is hard to release them all.  As the world becomes busier and easier to navigate, our minds and spirits have easier access to more worries, frustrations, etc.  Technology enables more pains and fears than ever before.  To truly become enlightened, it might be necessary to become like the Buddha and leave the trappings of civilization behind in order to live outside of ourselves.

When I first started learning about Buddhism, I read Buddhism Without Beliefs: A Contemporary Guide to Awakening

by Stephen Batchelor. This was exactly what I was looking for. Buddhism was not about gods or belief. It was about learning to let go. I was excited to join a Buddhist congregation, but didn't know where to start. When we moved to Tulsa, I found a temple that had English services. I was thrilled to be able to go, and I loved the services.

Meditation provides a way to focus your energy and mind in ways I had never experienced before. Have you ever attempted to meditate in the way that Buddhists meditate? It is not the act of focusing on something to attempt to understand it better; it is the act of clearing one's mind. If a thought floats to the surface of your mind, you are to notice it, acknowledge it, and let it go. It is an extremely difficult prospect, but it gives you great control over your mind. I highly recommend reading books about meditation by Ticht Naht Hahn

. I have enjoyed everything of his that I've read.

But, then 9/11 happened and Gary deployed. I had a 4 year old child, a 9 month old baby, and no babysitter. Temple visitation was next to impossible. My children were amazing, but it wasn't fair to them or the other members of the temple to force them to sit through the service. And that became the death nell for my Buddhist practice. Not long after that, we moved to a place that didn't have the services I needed. We now live somewhere that I could practice again, since we have a large Buddhist community here. I've considered getting back to practice, but it obviously hasn't been a big priority. On the other hand, Buddhism didn't require me to question my beliefs to practice it the way I did. It was more Zen Buddhism than anything else. In the meantime, I continued my search for religious understanding. It led me to Judaism.

This is the third installment of my series on religious searching. It is a long time (3 years) coming. If you would like to read the first two installments, please go to part 1 (me) here, and part 2 (Christianity) here.
Posted by Kristina at 11:40 PM

Email ThisBlogThis!Share to TwitterShare to FacebookShare to Pinterest
Labels: me, religion