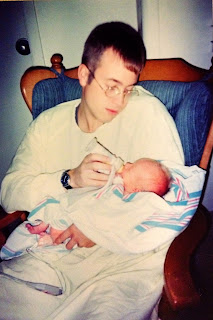 Gabriel was whisked away to the NICU within moments of being born. I had a fever and was not allowed inside the NICU. For the next 24 hours, I only saw my son once, through the window of the NICU. Gary pushed my wheelchair over to the NICU and I stood up to look through the window at my baby. They couldn't hold him up, since he was hooked up to all sorts of machines, with a tube coming out of his head. The hospital discharged me before I had a chance to truly see my son. For the next week, we drove back and forth to the hospital, 30 minutes away, to see our son, feed our son, and hold our son. Each feeding, the nurse would weigh Gabriel, then I would nurse him. If he had not gotten enough liquid, as verified by weighing him again after the nursing, Gary would feed him a bottle of formula. This was humorous, since Gabriel didn't like formula. He would suck it right out of that bottle, and spit it out the other side of his mouth. Gary was perpetually covered in formula. But, Gabriel would suck down that whole bottle, which was all that was required. They never did weigh him again after the bottles. You see, he had to have a certain amount of fluids, or they would put him back on an IV, and we wanted to prevent that if at all possible. he's already pulled them out of everywhere they'd put them except his head. He still had the port in his head, and we were looking to keep them from having to hook it back up.

You would think that initial experience in parenting would have made me more protective of my children. Perhaps it did the opposite. I don't know. I've always been a very laid back parent. Don't get me wrong. I attachment parented. I wore all of my babies in slings and backpacks. I nursed each of my children for at least 18 mos, and Gabriel for 2 1/2 years. I instituted a buddy policy with my children almost from day one. But, I did allow them to do things with a buddy that there are parents who still won't let their children do even with another adult.

Our kids have never flown to my mom's house because, although it is closer than the other grandparents' house, there have never been direct flights they can take. Well, now two of our children are old enough to fly as regular humans. No more unaccompanied minor status for them. This meant that I could put Xavier on a plane and send him to my mom's house to visit for a week. So, I did.

2 1/2 weeks ago, I took my 12 year old son to the airport and sat at the gate with him, waiting for his flight to board. He got on it and flew to another airport, where he quickly found his next flight, and flew to Tulsa to see my mom. There, instead of being met at the gate, he made his way off the plane and through the airport to find my mom. A week later, he took pictures of places in the Chicago airport that he thought were funny and sent them to me. He was completely comfortable with flying by this time.

Four days after I left Xavier at the airport, I took Gabriel to the airport. Gabriel is 16, and I did not accompany him through security. He got stuck in security because he had taken a jar of peanut butter with him. Oops. He barely made his flight. Talk about starting the day off tense. He had a long day of dominoes to knock down, and taking one of them out of place could have thrown everything else off.

Gabriel flew into Reagan National Airport, where he took the Metro to Union Station, boarded a Greyhound bus to Charlottesville, Va. In Charlottesville, Gabriel found the grocery store to replace the peanut butter security at the airport had stolen. Then, he took a taxi to Montpelier, where he spent a week digging in the dirt with strangers.

Well, this wonderful, totally on the ball, mom got his departure date wrong. Instead of him leaving on Saturday, as he was supposed to, I got his tickets for Sunday. Oops. When I realized this, I immediately reached out to friends and family to see if he could stay the night with one of them Saturday night. None of my family was available, but a bloggy buddy, someone we've only actually met once for a couple hours 6 years ago said he could crash on her couch.

Gabriel, being the wonderful, independent young man that he is, didn't even blink. He took the bus back to DC, and spent the day wondering around the monuments. When he got tired, he called Stina and let her know he was on his way. He took the Metro to the closest station to her house, where he was picked up and take to her house. There, he slept on what he claims is the most comfortable couch he's ever had the privilege of knowing, and arose bright and early the next morning so that she could drop him off at the Metro on her way to Mass. He spent the day at the Natural History Museum before taking himself to the airport, checking himself in, and coming home to me.

The week Gabriel was gone, parents kept asking me how I could let him go by himself. How did I have such an independent child? How was I handling him being gone, especially since he's not great at communicating?

Here's the answer to all those things. I parent by the seat of my pants. I have allowed my children freedom and independence since they were very young. I make decisions based on what is needed and wanted by our family, not what is normal or status quo. Frequently, my decisions go against the grain of present society. Maybe it's because I grew up on a steady diet of Louis Lamour and Little House on the Prairie books. I had and still have the firm conviction that children can do things, real things. Maybe I was allowed that same independence and that influenced me. After all, my parents allowed me to drive 4 hours away to a place I'd never been, with my younger brother, a couple months after I got my drivers license at 16, and I joined the Navy when I was 17.

I think the real answer is how could I not let him do this? I never set out to raise a child. I am raising a man, and he's quickly turning into one, a man I can be proud of. Or, perhaps we just have a bit of the Took clan in us.
Posted by Kristina at 3:10 PM