The Wisdom of the Young 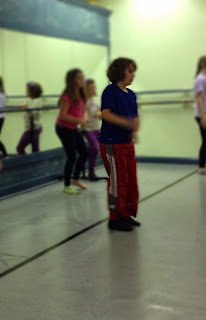 Last night, as Dominic was putting on his dance shoes, a little boy asked him if he was going to dance. When Dominic replied in the affirmative, the little boys said, "Boys don't dance!"

Dominic immediately replied, "This boy does," and went about his business putting on his shoes.

To which Dominic said, "Some boys dance, and some don't. If a boy wants to dance, the boy dances. If a boy doesn't want to dance, he doesn't dance."

The little boy sat there for a while, nodded, then was off to play with his sister. I cannot tell you how proud I am of the person my son is becoming.
Posted by Kristina at 8:25 PM