Waiting for the Good Days 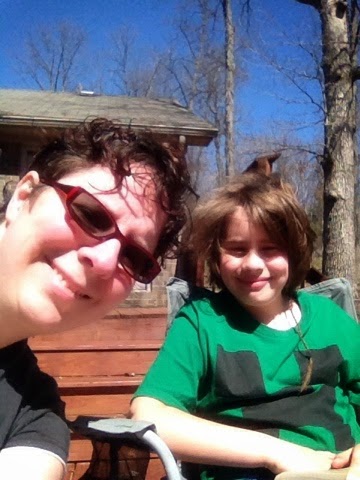 If you've followed my blog for a while, you know that I have a chronic illness. What you may not realize is that I've been battling it almost non-stop for the last 5 years. I haven't really shared much with the wider world. It's been a private struggle.

Last year, I got a job working at Starbucks. I enjoyed my job, but was exhausted all the time. I'm talking about crippling exhaustion that had me in bed asleep within an hour of getting off work. Exhaustion that kept me from caring for my children, or going grocery shopping. I also started getting migraines. I ended up in the hospital after one made us think I was having a stroke. I quit my job after 9 months because of my health. I was literally unable to work. We thought I would be better if I could just be at home.

But, I wasn't. In fact, the migraines continued to get worse until we found out I am allergic to dairy. We had done extensive allergy testing some time ago, and nothing had shown up. It wasn't until they did an ultra-sensitive blood test, that our insurance doesn't even pay for because it is considered experimental, that we found out what food was causing the migraines.

(A small gripe here about the insurance agency. They would pay $180 for a visit to a neurologist who told me, "We just don't know what causes migraines," did not do any testing, and prescribed a horribly expensive medication, which insurance paid for, but they would not pay for an experimental allergy test. That test has saved them hundreds of dollars, since I am no longer visiting the neurologist, or taking migraine medicine. End gripe.)

But, even after the migraines stopped, I was still experiencing that crippling exhaustion. I could not exercise because even a light work out would send me into days of sleep. Grocery shopping was out of the question. Sometimes, I was able to go with Gary and just walk around the store, but mostly I stayed home.

Then, a new doctor (one my insurance won't pay for, but is actually an MD, go figure) did genetic testing on me. He was the one who found the dairy allergy, and he found that I have an MHTFR mutation that causes me to have trouble processing methyl folate. (I think that's right; don't quote me on it, though.) He put me on high doses of methyl folate, omega 3s (they weren't even registering in my blood work), and potassium.

Things got better. Not great, but better. I still wasn't grocery shopping, and if I was planning to go out of an evening, we planned it carefully so that I wouldn't have to drive at night. Did I mention that my eyesight got exponentially worse? I went from never having to wear glasses to wearing reading glasses to having an astigmatism that has me in glasses all the time in about a year. I can't drive at night because the headlights of the cars blind me, and because I'm always too tired to be out past dark anyway.

I would have several good days, then a horrible day where I could not get out of bed. I think that because of the good days, the bad days were worse. We would think I was getting better, when in fact, I was just having a good day.

And there's always the guilt. The guilt that I'm not able to do things with my family, cook breakfast (if I cook breakfast, that's it for the day), drive my kids places, being able to talk to Gary when he gets home from work, is ever present.

It seems there is never an answer. Every time we figure out one thing, another thing steps in to take its place, but we have recently found something that makes us cautiously optimistic about the future. To be continued (because I've been watching a lot of Grimm, and the writers like cliff hangers).