Caught by the Scot- A Review

*I was given an advanced copy of this book in exchange for my honest review. I received my copy of Caught by the Scot by Karen Hawkins a couple weeks ago, but knowing myself the way I do, waited until Friday when I had no pressing homework to sit down and start the book. By the end of the first chapter, I was hooked and hard pressed to put the book down to go to class Friday afternoon. We had a trip to Albuquerque planned for Saturday, yet I still stayed up late reading. It wasn't until Gary started complaining about the light that I closed the book and went to sleep. Luckily, Gary got up before I absolutely had to and I was able to roll over and finish the book Saturday morning. 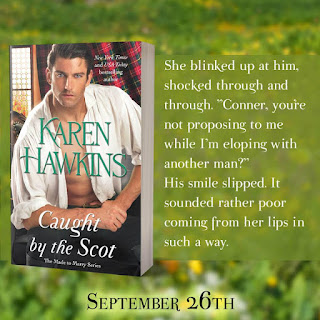 To be honest, I have not found a character of Hawkins' that I don't like. This holds true in this book. The main characters, Connor and Thea, are strong and like each other. There is tension, both sexual and emotional, that has to be resolved in order to make their romance work out. This is what makes for a good romance book in my opinion. One of my favorite things about Hawkins' writing is her sense of humor. I can expect to have at least a couple moments in every book where I am laughing out loud while my family looks at me with raised eyebrows. This book does not disappoint in this category. Humor is prevalent throughout the book. I especially enjoyed the way Connor, a ship's captain, used nautical terms and references frequently. They were scattered throughout the book, so I didn't get to the place where I thought they were overdone.

He laughed softly and lit his cigar. Sparring with her was as exhilarating as a sea battle.

A little about the plot- Connor and his brothers have been given an ultimatum. Get married or you don't get your inheritance. Connor sets out to marry his longtime friend who, unbeknownst to him, has been in love with him for years. Unfortunately for Connor, Thea has decided to marry someone else. The battle is on for Connor to convince Thea that he is the right man for her to marry. Obstacles are thrown in the lovers path, but as in any good romance, everything works out right in end. The journey is the story in any good romance, right?

Hawkins' ability to bring humor to her characters' lives through dialogue or situation makes for enjoyable reads every time. I highly recommend this book, the first in the Made to Marry series.

genre- historical romance set in the Regency time period, with the location split between Scotland and England

sex- (because some readers of romances need to know this sort of thing) There IS sex in this book. I would not call it explicit, and it is not the core of the book.

series: Made to Marry